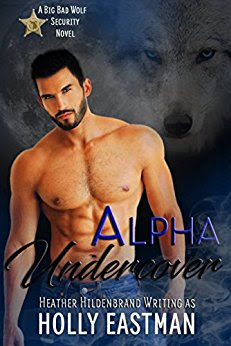 The Big Bad Wolf himself has come to town...
Gage Wilson isn't the guy you call to borrow a cup of sugar. But when Hardy Gilbert asks for a favor, you don't say no. Now, Gage is putting his ex-military skills to use, going undercover in a corrupt town in Montana to expose the crime boss and his gang of thugs selling silver bullets to the highest bidder. Only problem, he's falling hard for the boss's daughter.

Angie Cattaneo is sick of this life. It's taken everything from her and now, she's determined to hold her father accountable for everyone he has hurt and to find a way out on her own. Gage Wilson, criminal for hire, is only a temptation. A distraction that threatens to prolong her escape. But is he a temptation she can resist? Or is she doomed to a life of crime only to avoid her own heartbreak?

Oh my sexy shifters.       Gage goes undercover in a town full of shifters for the man who is selling silver bullets made to kill shifters.     What he doesn’t expect is to meet his mate.    Angie is used to set up Gage from the very beginning and they fall for each other.

Alpha Undercover is fast and full of action and drama.      I was kept up turning the pages having to know how the story would end and if it would have a happy ending.    I had ideas on what would happen, where the story would lead and was always surprised by where Holly Eastman led her readers.      I am a reader that follows the path the author wants the reader to follow and I have never enjoyed doing so more than while reading Alpha Undercover.

I definitely recommend picking up your own copy and become a fan of Holly Eastman just like I am.

Check out more of Holly Eastman's books at her website HERE