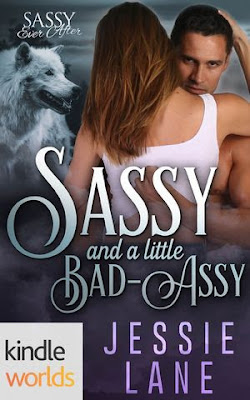 A Viking walks into a bar…
Nikki Wolf wished that was the beginning to a bad bar joke. Unfortunately, it was her crazy grandfather looking for her … dressed in full Viking regalia. All she had wanted was to get a few hours away from her slightly insane family.

… and gets thrown out on his ass by a sexy werewolf.
Cruz Morales started his first shift as a bouncer at the Thirsty Wolfe an hour ago. His boss said the place could get crazy, but Vikings? Really? At first, he couldn’t understand what the senile old man was shouting about. Then he spotted the sexy brunette hiding underneath a table. He didn’t know who the hell she was to the old man or why she was hiding, but the beast inside him knew one thing for sure: she would be his.

Jessie Lane is known for her incredible paranormal stories.     Sassy and a little Bad-Assy is another amazing novella.    This one is about a werewolf who meets his one true love.     Cruz is a lovable character.   His loss of his family shattered him and he was not looking for love again, ever.    When Nikki walks into the bar it is instant attraction and he knows he has no control over falling in love again.    I am a huge believer in second chances.   That is exactly what Cruz deserves.

I have to mention Nikki’s family.   They are crazy, quirky, and hilarious.     There were many times that I pictured her grandfather running the neighbor is his Viking costume, the twins being the pains they were good at, and of course the youngest brother just being the baby of the family.

While this is a novella and part of a Kindle Worlds Series there is an entire story here.   There is no cliffhanger.   Cruz and Nikki’s entire story is told, although I am sure there is much more that could happen in their lives and am enjoying imagining their future.    I certainly recommend checking out this fun, paranormal story.
Purchase your copy here  AMAZON
AA AA 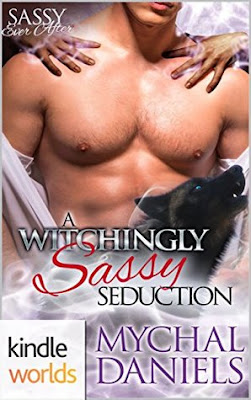 
Published August 30th 2016 by Kindle Worlds
New comer to town, Celia Thomas, has some big things in her life—a big mouth and an even bigger problem.

Said mouth has managed to get her into some serious trouble with a vicious coven, she's just so happened to have pissed off.

Celia’s a young, latent witch with no powers, trying to hide out in a powerful wolf shifter community, until she meets a man who won't let her hide--from him. Try as she might, she can’t hide from the mysterious lone wolf shifter, Owain Colfer. He’s just too damn hard to shake in more ways than one.

When she realizes he won't be easily ditched, she must come to terms with what she can and can’t do with this sexy wolf. What happens next is fun, sexy and oh so exciting.

My Thoughts…
A Witchingly Sassy Seduction is the third book in the Sassy Ever After Kindle World that I have read and with each book I find I am enjoying these characters more and more.    I love how each of the different authors are able to put their spin on the series and tie them together perfectly.

Mychal Daniels did a great job with Celia.     Her fear of being caught kept her on the run, even from her mate.    The issues she runs into  made me laugh.. being caught at a Scenting, being found on a rough, and of course the car breaking down.   I laughed until I realized why all this was happening to her and then it wasn’t quite so funny.      What I liked is how her mate called her out on what she was doing without pushing her to become someone she isn’t.

I certainly recommend checking out A Witchingly Sassy Seduction along with the others in the Sassy Ever After Kindle World.
Book Links
Amazon   |   Goodreads
This is a standalone, multicultural, curvy, BWWM, paranormal story that contains depictions of adult coupling. Suggested readers: +18 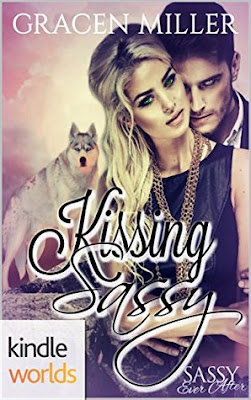 Cajun Wolfe doesn't have time for trouble in five-inch stilettos, but that's what he gets in the form of Hollywood's leading lady. When Olivia Scott waltzes into Blue Creek's shifter bar seeking his expertise for help with a stalker, Cajun's convinced she's a thrill seeker and he scorns her request. Soon he realizes he might've just met his match in a human, who also happens to be his mate. Olivia's not just sassy, stubborn, and unpredictable, she has a temper to match his too.

Then Olivia showed him what he was missing.

Olivia Scott has had it with arrogant men. Cajun scoffing at her genuine need for help is the final straw. Determined to find another that'll take her seriously, she storms off only to be attacked in the parking lot. Playing the part of unlikely hero, Cajun defeats her assailants. Meeting her mate in the form of a snarly wolf-shifter with a bad attitude is rotten luck. He's also a weakness she can't afford.

Trouble never looked so fun...
Their troubles are only beginning. A new danger arises and Olivia's secrets are revealed. Can Cajun convince her to gamble on a mating so inconceivable it might just be a pairing that'll save the world? Or will all be lost?

...or came with so much baggage.

When I am reading a paranormal book I look for sexy Alpha’s, hot romance, sex, and a strong female character.     All of this and so much more are what Gracen Miller give the reader in the short novella.    While this is a novella there is an entire story within the few pages.    There is the meeting of two strangers, the intrigue of how they will get along, the getting along (HOT!), and the dangers that come with being paranormal beings.

Cajun is a true wolf.   He knows what he wants and goes for it!   What does he want?   Well, of course he wants Olivia.    The question is can Olivia be with him?  I love that there was an obvious attraction, the mating wolf was coming out, and Olivia continued to fight.   Anyone who knows a wolf knows that you can’t fight the mating.      I just kept saying fight it Olivia, fight it Olivia…not because I didn’t want them together but because it was so fun to see her try to hide her feelings and not fall for Cajun.

My favorite part of the story is Aunt B and all the girls.    The way they took Olivia into their family with no questions asked and did what they had to do to keep her safe was perfect.    There was a true family sense and I really loved that Olivia had someone looking out for her.    Someone more than the man who wanted to claim her for his own.

I feel like there is more to this story and would love another short story as a follow up.      But I definitely recommend picking up Gracen Miller’s addition to the Sassy World.
Book Links
Amazon   | Goodreads 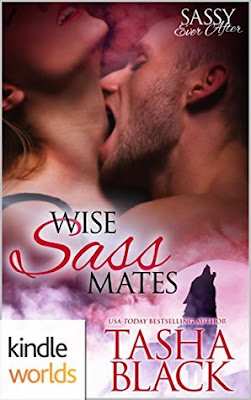 What happens when you grow up and move on, but your crush on your teacher doesn’t?

Bianca Silver is back in her hometown, researching shifter culture with her two best friends. An unexpected encounter in the woods with the teacher she’s dreamed about since she was a teenager sends her quiet new life into a tailspin, putting Bianca in grave danger and offering her a depth of longing and pleasure she never imagined was possible.

Ian Anderson has spent the last ten years trying to repress the violent lust and protectiveness he feels toward honor student, Bianca Silver. When he reunites with grown-up Bianca in the woods the night of a Scenting Ceremony his control over his instincts is lost. But loving Bianca isn’t as easy as he thought it would be. Between her stubborn streak and the efforts of the person who seems to want her out of the picture, it’s going to take their combined wisdom for these fated mates to begin their new life.

Holy hotness.     Ian and Bianca got right to it.   Sure they knew each other from earlier in their lives but wowser!  I was torn on how I felt about their first meeting after Bianca returned to town.  Was it okay for them just to fall together?   Should they have had more interactions before getting to business?    As I continued reading I was sure that Tasha Black had it just right.

What stuck with me after the hotness was the friendships.    Bianca had real and true girlfriends.    They fed off each other’s relationships and drama but they had each other’s backs without ever doubting.    They came to Bianca’s rescue more than once and didn’t let her off the hook when they knew something good was happening to her.     The conversations seemed true to real life girlfriends chat sessions.

This is my 4th Sassy Ever After Kindle World book.    In each book I have noticed one returning character… Aunt B.   She is the matriarch of the Wolfe family and a matchmaker with a vested interest in everyone finding a happy ever after.    Every family needs an Aunt B and I love that she has a continuing presence in these stories. 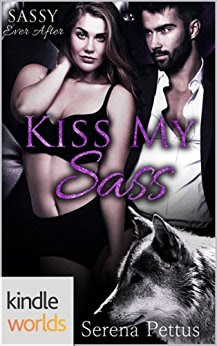 There was something about watching your best friend die in front of you that changed a man. However, when that friend also had a child on the way by a woman who knew nothing of his true nature, it presented a whole new set of problems.
Now Luke had to find this woman and explain to her that the father of her child was not only dead, but was also a shifter. How hard could it be?

Ashe had always considered herself to be a strong woman, so when her baby’s father disappears she does the only thing she can…she carries on.
With her parents having passed, she’s now back in her childhood home, ready to raise her own child there as well. If only her uncle wasn’t such a nuisance, things would be perfect.
Things start to look up when a new guy in town grabs her attention. It’s just too bad he comes bearing the worst news…her daughter’s father has died, and her baby girl is so much more than she appears.

Luke did his job. He delivered the news of his friend’s death. However, he didn’t count on Ashe being the one sassy, strong-willed woman his wolf would never allow him to walk away from.
Now he not only needs to figure out how to go about wooing a single mom into taking a chance on a lone wolf, but he also has to find out who the strange shifter in town is, and why he’s coming after Ashe.

With a crazy witch, and his old military buddy to help him out, Luke should have no problems...right?

I love that this novella is a standalone.     Pick it up in the morning and devour the short story in a few hours (or less if you read fast.)   The story has a great cast of characters, an amazing storyline, and a definite ending.    There is no cliffhanger, no what ifs, and no waiting for a second book to be released.      It was also nice to see Aunt B make an appearance; she’s been appearing in the other Sassy Ever After Kindle World book I have read.

I recommend picking up your copy from Amazon and checking out what this series is all about.