Sisters of Heart and Snow by Margaret Dilloway 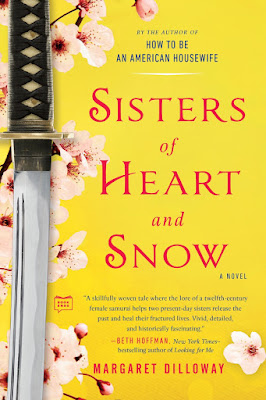 ABOUT SISTERS OF HEART AND SNOW: Rachel and Drew Snow might be sisters, but their lives have followed completely different paths. As the adult daughters of an American father and a Japanese mail order bride, they grew up in southern California, caught between Killian, their demanding quick-tempered father, and Hikari, their stoic deferential mother.  Rachel, now thirty-eight, was a typical rebellious sixteen-year-old when her father kicked her out of the house for youthful indiscretions. Now she’s married to a good man and has two strong-willed kids of her own who test her limits every day.  Her talented younger sister Drew followed her passion for music, but her career is stalled along with her love life.  The sisters’ relationship has been strained for years, but an odd request from their Alzheimer stricken mother launches them on a surprising journey that heals and reunites them in ways they never imagined possible.

Hikari’s lucid moments are becoming more infrequent, but she manages to ask Rachel to retrieve a large book from her sewing room, a book Rachel has never seen.  It’s an album of sorts containing old, unlabeled photos and a reproduction of an ancient text.  Neither she nor Drew can translate it and when a local student steps in to help, the mystery only deepens.  Why give it to them now?  Who are the Japanese people in the faded photos?  Why did their mother reveal so little of herself and her past life but save this samurai story for decades?  What did she hope her daughters would gain from it?

Alternating chapters on the sisters’ turbulent lives with the compelling twelfth-century tale of real-life female samurai Tomoe Gozen,SISTERS OF HEART AND SNOW reveals what happens when modern sisters discover that courage isn’t only for bold warrior women of ancient times, but for them as well.

Sisters of Heart and Snow is a different story.    The story of Rachel and Drew is one that has been shared many times.   The story of sisters who are not close and have an interesting sometimes conflicting relationship.      The difference is it was not their fault that they grew apart, the blame for that is on their parents.   The hard ass father, the mother who can’t stand up for herself much less her children.    At 16 Rachel is kicked out of her house and all ties are severed.

There is a whole secondary story within this book.   The story of Japan in the 1100’s and Tomoe.  I didn’t love this story.   I struggled with this part of the book.      I wasn’t pulled into the story.   The timeframe and location are very foreign to me.
What made me want to read this book more than others is the gorgeous yellow cover.   It draws me to it, made me pick it up, and had me opening it as soon as I got it.     The sword on the front intrigued me.     The bright red writing caught my eye.      It is beautiful and basic.

ABOUT THE AUTHOR: Margaret Dilloway is the author of How to Be an American Housewife, The Care and Handling of Roses with Thorns, and a middle-grade fantasy series which Disney-Hyperion is publishing on April 5, 2016 beginning with Momotaro: Xander and the Lost Island of Monsters. Shelives in Southern California with her husband and their three children.

INCREDIBLE PRAISE FOR SISTERS OF HEART AND SNOW:
"No matter what thread she’s spinning, Dilloway writes in a hushed style that makes the reader feel serene. Is it underselling someone’s hard work to say their book feels like a literary “om” chant? Because I mean it as a huge compliment—and a thank-you."—GLAMOUR.com

"...one epic tale of love, family, and finding the inspiration to be warrior women no matter the age or
era." —POPSUGAR

"This tale is a journey of self-discovery, appreciation and acceptance, and will serve as an inspiration to readers." —RT Book Reviews

"In this enjoyable novel, imperfect and at times unlikable women become lovable.” —Kirkus

"I deeply admire Margaret Dilloway’s deftness in braiding together past and present, but what I love best about this book is that every relationship rings true, particularly the complicated bonds of sisterhood.”  —Marisa de los Santos, New York Times bestselling author of Love Walked In and Belong to Me

“If you don’t have a sister, you’ll wish you had one. If you do, you’ll want to go find her and hold her tight.”—Julie Kibler, author of Calling Me Home