Until It's You by C.B. Salem 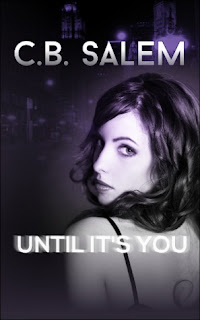 Desire can be deadly.

Problem is, they’re holed up in a safe house because someone else has been looking for him too. Someone desperate to get to him, no matter the collateral damage.

It all centers on a pharmaceutical that controls the deepest desires of whoever ingests it. A substance so powerful, it turns people into slaves.

Somebody wants that power, and Landon is the only one who can give it.

Now she has to unravel the tangled situation in front of her before it’s too late. All while keeping the emergence of her own desires firmly under control...as well as his.

Until It’s You is a continuation of Everywhere It’s You.    The story continues with Kristina and Landon in hiding from whomever is chasing them and wanting to kill them over a pharm that would change the world in a not so good way.    I was kept guessing as to whom I could trust, who was telling the truth, and who was helping them.

I love how C.B.Salem wrote a futuristic book, yet it was believable.     The auto-drive vehicles, the pharms, the comms, the restaurants, and the cosmetics were all things that were different than what we have now but believable that in the future they will happen.

I feel like there could be more to the story.    There are parts that are left unsolved.  I have my thoughts on where the story could go but hope that C.B. Salem will continue it for me.

This is a series that does need to be read in order.    Book 1 ends and book 2 takes off right where it ends.   I recommend checking out this series.   It is a worthwhile, fun,  and entertaining read.

Check out my thoughts on Everywhere It's You HERE