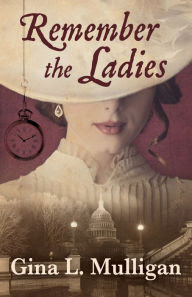 Growing up in an orphanage prepared Amelia Cooke for the high-stakes role of a female lobbyist surrounded by the egos of the 1887 Congress, a time before women had the right to vote. Her success in the isolating male arena comes from using the tactics she’s learned from those who oppressed her. So when she’s hired by the National Women’s Suffrage Association to help pass a proposed constitutional amendment granting women’s voting rights, Amelia feels empowered to at last win a place for herself and give all women a voice in the world. What she doesn’t foresee is the charismatic and calculating Senator Edward Stillman who threatens to ruin her hard-earned reputation and end her career.


Edward Stillman is desperate for status and power among Washington’s Old Guard. To gain control of the most dominant committee in the Senate, Stillman must crush the women’s amendment and anyone else in his way, including Amelia. He’s driven, clever, and willing to exploit any advantage. But in a political game where bribery, threats, extortion, and seduction prevail, each player must decide just how low they are willing to let the fight go. Who will win? And at what cost?

Set in the extravagant Gilded Age, Remember the Ladies explores the conflict between the sexes with delightful writing and elegant descriptions, which brings the reader back to a time when the struggle for women’s equality had just begun.

Remember the Ladies is a true historical fiction novel.     It tells the story of how the government works in the past and how it still works.    There is more than just taking a bill to the floor of Congress and the Congressmen voting.     What I found interesting is how Gina Mulligan focused on the right for women to vote.

Lobbyists are typical men in the 1887’s until Amelia Cooke arrives in Washington D.C.      She becomes a women lobbyist and takes a special interest in many future laws and in many interesting lawmakers.     Amelia grew up in an orphanage and was always promoting equal rights, even as a child.   As she leaves the orphanage and is trying to find herself she realizes exactly what she wants to do and goes about accomplishing it.     I enjoyed how strong and self sufficient Amelia was portrayed as.    She has moments of weakness’ throughout the story but not often.

Edward Stllman is an interesting politician.     I enjoyed the sparring of words between Amelia and Edward, while hoping that maybe they would find common ground and be a couple.    It was interesting to see the lengths that Edward would go to pass the laws he needed pass and stop the laws that would work in his favor.    I could have handled knowing more about his personal life as his wife and children were mentioned a few times but we didn’t really know much about them.     I also wonder what kind of a life he would have had if his father had been less in charge.

I recommend checking it out.    This is a book that will stay with me and I cannot wait to share the story with my fellow book lovers.

Want to know more about Gina L. Mulligan?   Check out her website.   http://www.ginamulligan.com/