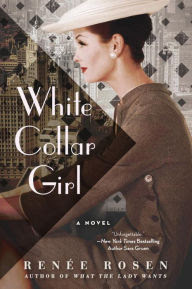 Every second of every day, something is happening. There’s a story out there buried in the muck, and Jordan Walsh, coming from a family of esteemed reporters, wants to be the one to dig it up. But it’s 1955, and the men who dominate the city room of the Chicago Tribune have no interest in making room for a female cub reporter. Instead Jordan is relegated to society news, reporting on Marilyn Monroe sightings at the Pump Room and interviewing secretaries for the White Collar Girl column.

Even with her journalistic legacy and connections to luminaries like Mike Royko, Nelson Algren, and Ernest Hemingway, Jordan struggles to be taken seriously. Of course, that all changes the moment she establishes a secret source inside Mayor Daley’s office and gets her hands on some confidential information. Now careers and lives are hanging on Jordan’s every word. But if she succeeds in landing her stories on the front page, there’s no guarantee she’ll remain above the fold.…

Being a woman journalist in the 1950’s means writing the society section.   That is not where Jordan Walsh is going to settle for staying.     Jordan is a woman that steps outside of the box and chases down leads that are not always appropriate for a woman to follow.       Even when the men in the industry try to put her in her place and keep her in check she steps out and does what she thinks her brother would have done.

I enjoyed that there was more to the story than Jordan just being a journalist.     Her home life was just as intriguing to me.   I could not imagine living through the hardship that she has.   The fact that she lives in her brother’s shadow and gets no attention for her accomplishments from her mother or father makes me sad for her.    She deserves to be recognized as the journalist she is working so hard to be, yet does not know how to get there.

Her romantic life is just as interesting.   The man she is dating is also a dating.   At no point in the story did I like him.    He was selfish, obnoxious, and just not very nice to Jordan.    There was no support and he had no reason other than jealousy to not be proud of her accomplishments and supportive of her hard work.

If you are looking for a romance book, this may not be what you are looking for.  This is a book with romance in it, but it is truly a story of a woman in the 1950’s pushing the boundaries that women have been stuck in.    Jordan is a woman who knows what she wants in life and realizes she doesn’t need a man to get her there.