I received this book from Penguin Random House in exchange for a honest review. 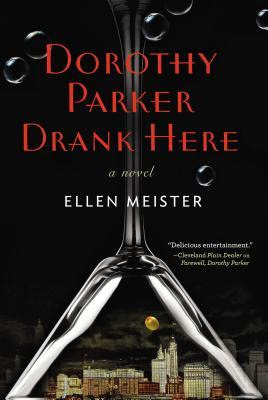 Heavenly peace? No, thank you. Dorothy Parker would rather wander the famous halls of the Algonquin Hotel, drink in hand, searching for someone, anyone, who will keep her company on this side of eternity.

After forty years she thinks she’s found the perfect candidate in Ted Shriver, a brilliant literary voice of the 1970s, silenced early in a promising career by a devastating plagiarism scandal. Now a prickly recluse, he hides away in the old hotel slowly dying of cancer, which he refuses to treat. If she can just convince him to sign the infamous guestbook of Percy Coates, Dorothy Parker might be able to persuade the jaded writer to spurn the white light with her. Ted, however, might be the only person living or dead who’s more stubborn than Parker, and he rejects her proposal outright.

When a young, ambitious TV producer, Norah Wolfe, enters the hotel in search of Ted Shriver, Parker sees another opportunity to get what she wants. Instead, she and Norah manage to uncover such startling secrets about Ted’s past that the future changes for all of them.

A story about a ghost who doesn’t follow the white light and continues to hang out at the Algonquin Hotel where she frequently met her friends is not my usual read.     Yet, I could not put Dorothy Parker Drank Here down.   I love that Dorothy was a quirky, mouthy, noisy ghost that could only take form when the guestbook she signed is left open.    She held her own, somehow always got her way, and drank a ton of alcohol all while making “friends” and causing havoc at the hotel.   It is such a great story.

I did not find this to be a quick read.    It had a lot of information, a lot of deals, and a lot of fun.    There were promises made, promises broke, and promises kept.    It seemed every character had a secret, whether they shared the secret with the others was all part of the story.   There is so much going on in this story, so much fun.

“Not even death can keep Dorothy Parker down in this sad and funny story.” —Kirkus Reviews

“[DOROTHY PARKER DRANK HERE] does a lovely job of imagining the voice of Dorothy Parker with equal parts wit, heartbreak, and practicality.” —Booklist

“...a quick, charming read that will delight Parker fans and stoke the curiosity of those unfamiliar with her great wit.” —Library Journal

“Between the martinis and the bon mots, there’s bite and charm in [DOROTHY PARKER DRANK HERE], which conjures the spirit of the titular literary wit.”—Closer Magazine

“This well-written story rolls right along after drawing you in at page one. Meister has a flare for the quips for which Dorothy Parker was so famous, making the reader feel as if the venerable Mrs. Parker has sprung back to life, never to leave us again.”—Dish Magazine

“Classic wit, sparkling zingers and rapid-fire one-liners . . . park reality at the door and let this book sweep you up into a nostalgic tale punctuated with contemporary themes.”—Lincoln Journal Star

“The writing is stellar, making it difficult to put the book down.”—RT Book Reviews

“It’s a great comic complement to novels like THE PARIS WIFE and LOVING FRANK, and if you’re not a fan of Parker’s or Meister’s already, you soon will be.”—Book Reporter

“DOROTHY PARKER DRANK HERE is a wild ride, pairing the well-researched wit of Dorothy Parker with a contemporary story of success and failure, romance and family. Meister’s brilliant interpretation of Parker’s ghost in the modern world keeps the novel from ever veering into the land of cliché as she brings to life—or rather, brings to ghostliness—the spirit of one of the most famous writers of the Algonquin Round Table.”
—Shelf Awareness