Meditations in Wonderland by Anna Patrick 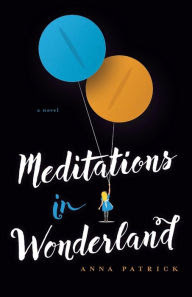 Elizabeth, a twenty-four-year-old interior designer living in Brooklyn, New York, encounters a little more than mental static when she sits down for her morning meditation, feeling disconnected from herself and her reality. As she meditates, she forces herself to confront her inner demons head on—including the darker parts that she would rather keep hidden from others, like her boyfriend, Adam. Her inner conflict leads her down a rabbit hole that is far different from the one she remembers from her favorite childhood story. When Elizabeth reaches the bottom of the rabbit hole, she follows a shadowy figure in a familiar blue dress who taunts her and coaxes her deeper into Wonderland.

Unable to release herself from her meditation, Elizabeth chases Alice through Wonderland, guided by clues left by Alice, as well as the dark and strangely familiar characters she meets, like the Cheshire Cat, the Tweedle twins, and the Mad Hatter. In Wonderland, Elizabeth comes face to face with her inner light and darkness, and, finally, Alice—and discovers that Alice’s secret might be what she has been searching for all along.

I love plays on familiar fairy tales.    Alice in Wonderland is always a favorite.   There are so many ways for an author to take liberties with the story and make it their own.   That is exactly what Anna Patrick did, yet the original story is recognizable.

Elizabeth is taking time before work to meditate and ends up down the rabbit hole.    She chases Alice through Wonderland, meeting all of the expected Alice in Wonderland characters.      Really, she is looking at herself.     She is seeing herself and Wonderland through her own eyes but does not realize it.    This is a story of finding one’s self,  seeing yourself through someone else’s eyes, and learning how others perceive you.     All of it told through Elizabeth’s journey into Wonderland.

There were points where I skimmed paragraphs, the story seemed to drag.   Don’t take that as that I did not enjoy the book.  I did.   I finished it two days ago and I am still thinking about it.     I will be looking for more from Anna Patrick.