Stars of Fortune (The Guardian Trilogy #1) by Nora Roberts 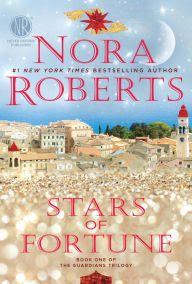 Sasha Riggs is a reclusive artist, haunted by dreams and nightmares that she turns into extraordinary paintings. Her visions lead her to the Greek island of Corfu, where five others have been lured to seek the fire star. Sasha recognizes them, because she has drawn them: a magician, an archaeologist, a wanderer, a fighter, a loner. All on a quest. All with secrets.

Sasha is the one who holds them together—the seer. And in the magician, Bran Killian, she sees a man of immense power and compassion. As Sasha struggles with her rare ability, Bran is there to support her, challenge her, and believe in her.

But Sasha and Bran are just two of the six. And they all must all work together as a team to find the fire star in a cradle of land beneath the sea. Over their every attempt at trust, unity, and love, a dark threat looms. And it seeks to corrupt everything that stands in its way of possessing the stars…

What happens when you put six characters, each with special gifts, together?   They form bonds and friendships while searching for the fire star.    However, there are forces out there working against them and wanting to hurt them.

Stars of Fortune has all of the qualities I look for in a Nora Roberts book.   There are strong friendships and relationship, wonderful descriptions of the locations of the story and the surroundings, and beautiful romances.      Some of the friendships were easy to see happening while others were a little more work.    Not all the characters were open and immediately accepting of each other.   They all realized that they needed each other to succeed in finding the fire star, but were not sure how much they could trust.      The location of this story, an island with beautiful beaches, and private villas was amazing.  I could picture the villa on the cliff, the hidden caves used for snorkeling, and the beautiful beaches for running and swimming from.     A sign of a good book is one that as I read I can see the scenes play out like a movie in my mind.

I did notice that there were similarities in this book to some of Nora Roberts other stories.   This did not bother me.    I will without a doubt continue this series.     I believe that this is a sign of Nora Roberts writing style.

I cannot wait to see what else happens with Sasha, Bran, Riley, Doyle, Sawyer, and Annika.