Along the Infinite Sea by Beatriz Williams & GIVEAWAY 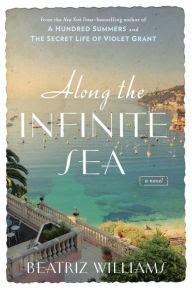 Want to win your own copy of Along the Infinite Sea?  Leave a comment here telling me what your favorite historical fiction book is.   Be sure to leave me your email in the comments so I can get in touch with the winner.  Get an extra entry if you share this giveaway on Facebook and leave the link here.    I will pick one winner on Friday November 6th.