The Sound of Glass by Karen White 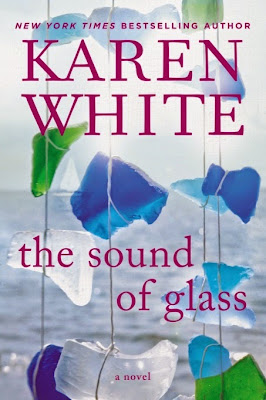 It has been two years since the death of Merritt Heyward’s husband, Cal, when she receives unexpected news—Cal’s family home in Beaufort, South Carolina, bequeathed by Cal’s reclusive grandmother, now belongs to Merritt.

Charting the course of an uncertain life—and feeling guilt from her husband’s tragic death—Merritt travels from her home in Maine to Beaufort, where the secrets of Cal’s unspoken-of past reside among the pluff mud and jasmine of the ancestral Heyward home on the Bluff. This unknown legacy, now Merritt’s, will change and define her as she navigates her new life—a new life complicated by the arrival of her too young stepmother and ten-year-old half-brother.

Soon, in this house of strangers, Merritt is forced into unraveling the Heyward family past as she faces her own fears and finds the healing she needs in the salt air of the Low Country.

Loralee and Merritt are the main characters in this story.   I felt for them both.   While Loralee had found her happy place, Merritt was still searching for hers.   Together they just worked.   I found it hard to remember that Loralee is Merritt’s step-mother.   Loralee seemed so young to me.   She was full of life and never let her situation pull her down or distract her from those around her.    Yet, she had been married to Merritt’s father.   Merritt had an old soul or maybe just had a rough enough life that she grew old quicker than she should have.   She had tough skin and a lot of fears to overcome.   Loralee is so good for her.

Ten year old Owen, Merritt’s half brother and Loralee’s son, is a great character.   He is smart, almost too smart for his own good.   Yet he understands life.   He has lost his dad, has moved across the country to meet a sister for the first time, and still manages to be happy and accepting of life.   I felt like he ties all the characters together.   Everyone who meets him loves him, making them all have a connection to each other.

Then of course there is Gibbes.  Sigh, a pediatrician who is good looking, understanding, and an all around good person.    I so wanted him to find his place in Merritt, Loralee, and Owen’s lives.    They were his family, whether he wanted them to be or not.    He understood that Owen needed a father figure yet didn’t push it.   He was there for Merritt even when she didn’t want him to be.   He kept Loralee’s secret.


The Sound of Glass is a great story.  There is intrigue, a mystery, romance, and truth.  I would recommend this story to all  adult lit readers.