Every Fifteen Minutes by Lisa Scottoline 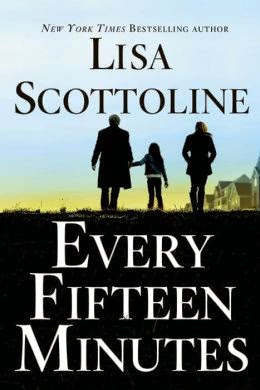 Dr. Eric Parrish is the Chief of the Psychiatric Unit at Havemeyer General Hospital outside of Philadelphia. Recently separated from his wife, Caitlin, he is doing his best as a single dad to his seven-year-old daughter Hannah. His work seems to be going better than his home life, however. His unit at the hospital has just been named number two in the country and Eric has a devoted staff of doctors and nurses who are as caring as Eric is. But when he takes on a new patient, Eric's entire world begins to crumble. Seventeen-year-old Max has a terminally ill grandmother and is having trouble handling it. That, plus his OCD and violent thoughts about a girl he likes makes Max a high risk patient. Max can't turn off the rituals he needs to perform every fifteen minutes that keep him calm. With the pressure mounting, Max just might reach the breaking point. When the girl is found murdered, Max is nowhere to be found. Worried about Max, Eric goes looking for him and puts himself in danger of being seen as a "person of interest". Next, one of his own staff turns on him in a trumped up charge of sexual harassment. Is this chaos all random? Or is someone systematically trying to destroy Eric's life?
My Thoughts…

Every Fifteen Minutes is a book that will stay with you throughout your day.   I started it and kept reading.  I just could not put it down.  I wanted to know what was happening with Dr. Parrish, his daughter Hannah, and of course Max.    I knew that there was more to the story than what met the eye and I enjoyed trying to put the clues together.    As the story continued I gathered the clues and kept guessing at who was causing all the chaos.  I am happy to say I was partially right, but did not put it all together until the end.

Max is a great character.   He is an intelligent and intriguing young man.   I felt bad for the life that he was forced to live.    Having his grandmother in his life was a Godsend for him.   The relationship between them is the healthiest thing he has.  I was upset with his mother.  I have a rough time understanding parents who do not take care of their children.   The relationship between Dr. Parrish and Max was encouraging.   I thought maybe he would be the saving factor in Max’s life.

Lisa Scottoline is an author that I always enjoy.   Her mysteries, relationships, and style of writing have never let me down.    Every Fifteen Minutes is amazing.    Definitely pick up a copy today.