The Daughter by Jane Shemlit 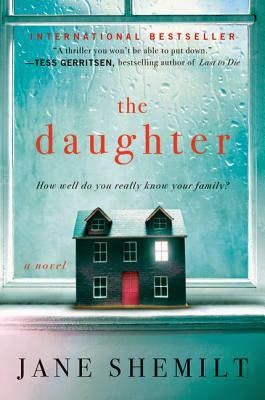 How well do you really know those you love?

Jenny loves her three teenage children and her husband, Ted, a celebrated neurosurgeon. She loves the way that, as a family, they always know each other's problems and don't keep secrets from each other.

But when her youngest child, fifteen-year-old Naomi, doesn't come home after her school play and a nationwide search for her begins, secrets previously kept from Jenny are revealed.

Naomi has vanished, leaving her family broken and her mother desperately searching for answers. But the traces Naomi's left behind reveal a very different girl to the one Jenny thought she'd raised. And the more she looks the more she learns that everyone she trusted has been keeping secrets.

How well does she really know her sons, her husband? How well did she know Naomi? If Jenny is going to find her, she'll have to first uncover the truth about the daughter she thought told her everything

The Daughter is a book that I was nervous about reading.   A story about a teenage daughter that goes missing is never easy.

This story is told from the mothers point of view.    The guilt and blame she has mirrors what any mother would feel when her daughter doesn't come home one night.    But add to that lose all the secrets she finds out about the rest of her family and her life should be shattered.    Yet, jenny stays strong and holds onto her belief that Naomi is out there and alive.    She never gives up and a year after the disappearance she is still finding clues and holding out hope.
Daughter flashes between the present, the days before Naomi's disappearance, and the days immediately following her disappearance.      I loved that each part was labeled so there was never any question of the timing.     I also found that each part of the story gave me clues and insight into where Jane Shemitt wanted to lead the readers.   While I never solved the mystery until the very end, I enjoyed trying to put the clues together.