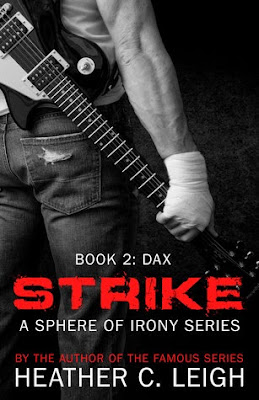 Privilege, poverty, death, and self-loathing; these are the backgrounds of the men of the internationally famous rock band, Sphere of Irony.

From a young age, Dax and his brothers are groomed to become money earners in their father's club. Broken bones and bruises are commonplace. Their father pits the brothers against each other to 'toughen them up' for the ring. His future is in the cage, not on stage where he dreams of being.

Kate Campbell loves one thing in life. Well, two. Soccer and Dax Davies. Growing up in the poorest part of London, soccer is her personal escape from reality and the fact that Dax doesn't seem to know she exists. She figures if she can be good enough at it, maybe she can get away from Hackney, and leave the poverty behind.

Kate doesn't plan on ever getting a chance to know Dax as more than an unattainable dream. After a mutual acquaintance brings them together, it only takes one ill-fated night at the fight club tear them apart.

I thought Heather C. Leigh outdid herself with Adam’s story and then she introduced me to Dax.    He is almost perfect, with some faults.   And oh what faults they are.   His toughness and stubbornness could drive a woman crazy, which is exactly what they do to Kate.     The sparks flew for Kate from the first time she laid eyes on Dax.   He didn’t seem to even know she was alive, but that didn’t matter.  She pined for him and adored him from afar.     Then they met, I mean really met, and the sparks flew.   Along with the sparks are all the insecurities they both have with each other and about themselves.

I had a lot of favorite parts while reading Strike, but the best is the ending.   I have already been lucky enough to read Adam’s story so I knew what happen with him and Ellie, yet Heather brought their story into Dax and Kate’s story throughout the entire book.   I loved the ending when she really tied Adam’s story into Dax’s.  It seems like such a small thing, yet for me I went awww.   It brought back my thoughts and feelings for Adam (who is still my favorite).

This is Dax’s story.   It is the story of how a boy who is pressured by his father to perform when he doesn’t want to and to live his life the way he isn’t comfortable with learns to stand on his own.   He takes his life and turns into what he wants.   Dax is a strong, alpha male, who is definitely use to getting his way with the women.   Until he meets Kate and she stands up to him.   She is a strong female who knows what she wants from life and is not going to let anything, including a man, get in her way.  The two of them together are wonderful.   They fight, they love, and they support each other.   Even apart they care about each other.

I love this series.   Each book can be read alone, but of course they are better when read together.    I cannot wait for the rest of the band members to tell their tales.