The House of Hawthorne by Erika Robuck 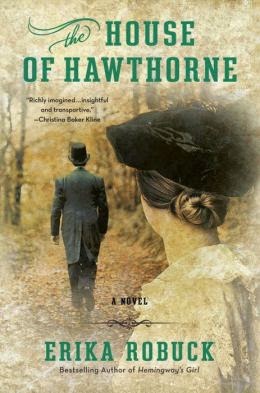 Beset by crippling headaches from a young age and endowed with a talent for drawing, Sophia is discouraged by her well-known New England family from pursuing a woman’s traditional roles. But from their first meeting, Nathaniel and Sophia begin an intense romantic relationship that despite many setbacks leads to their marriage. Together, they will cross continents, raise children, and experience all the beauty and tragedy of an exceptional partnership. Sophia’s vivid journals and her masterful paintings kindle a fire in Nathaniel, inspiring his writing. But their children’s needs and the death of loved ones steal Sophia’s energy and time for her art, fueling in her a perennial tug-of-war between fulfilling her domestic duties and pursuing her own desires.

Spanning the years from the 1830s to the Civil War, and moving from Massachusetts to England, Portugal, and Italy, The House of Hawthorneexplores the tension within a famous marriage of two soulful, strong-willed people, each devoted to the other but also driven by a powerful need to explore the far reaches of their creative impulses. It is the story of a forgotten woman in history, who inspired one of the greatest writers of American literature.
My Thoughts…

Nathaniel Hawthorne and his wife lived a very interesting life.   I was enthralled with how they stayed connected to each other through so many trials.  They were rich, poor, separated, living in foreign lands, sick, and so much more yet they managed to keep their love alive and live fulfilling lives together.    I have heard stories of true love before, yet this is a real story of true love.  It is not a live wrapped up in a pretty bow where all is easy and happy.  The House of Hawthorne is a story of real true love.   Nathaniel and Sophia are in physical pain when they are separated, they need each other, live off being with each other.

I loved Sophia.   From the first time she met Nathaniel and knew of her sisters care for him, she tried to do the right thing but the heart knew better.   The pulled between them was undeniable.   As her life moves forward with her family, Sophia puts her own art on hold and raises her family.   This is a typical mother, she has to.   She does it without complaint and understands that her time for art is not over, she is just making a different form of art.  She had a contentment about her that made her a great example for mothers, even in today’s world, of how unselfish you have to be to raise your children and keep your family safe.

The timeframe of The House of Hawthorne was of great interest to me.  Not only did I see how life in America was in the 19th century, but I was taken across the ocean to places that I dream of visiting.    Each place that was visited was brought to life with the descriptions of the towns, the buildings, the surroundings, and also the people and their lifestyles.   The details were evident that Erika Robuck did her research.

This is my first novel by Erika Robuck and I cannot wait to read more.  I will recommend this book.