Once Upon a Forever by A.V. Scott 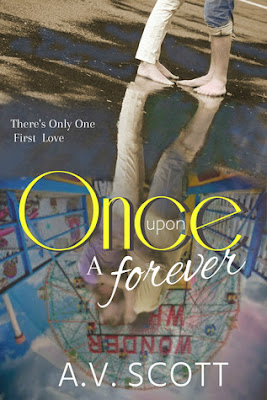 Eight years ago, Cooper was dating the hottest and most desired girl in Ash Falls and on his way to take over his father’s hotel empire –– the thing was, it wasn’t the life he wanted. The only way he could escape the life his parents had planned for him, was to give up the money and power that came with being a Chamberlin. And, that’s exactly what he planned to do. At the end of the Summer, he was going to leave it all behind, start a new life, on his own terms and without the influence that came with being a Chamberlin.

That was, before he met Emma.

Following her parents’ divorce, Emma is the rock for her alcoholic mother, and her younger sister. She appears resilient, and tenacious, but inside she’s falling apart. The only thing that keeps her going is her love for writing poetry, and that when she finally graduates High School, she’ll be able to start living the life she has always dreamed of.

Until she meets Cooper.

It was supposed to be a Summer fling. She had dreams of her own. Dreams that didn’t include him or his social circles. No one even knew they were friends, let alone lovers. Yet, for one Summer, Emma became Cooper’s entire world. And he, a reminder that love doesn’t have to come with warning signs.

Until one frightful night, when both of their lives, and the lives of the residents of Ash Falls, were turned upside down. Emma is left with one choice, run from the life she thought she didn’t want, and the guy who stole her heart.

But, when she returns six years she is faced with a devastating truth that shakes the very foundation that her life was built upon. Another has already claimed the man she loves.

Will true love prove the test of time?

Will cooper find his way without losing the things and people that matter to him the most?

Can Emma recover from life's lessons?

Could Emma and Cooper’s love survive when those closest to them keep tearing them apart?

Sometimes when a story flips between characters and/or time it can get confusing.     A.V. Scott handled both of these perfectly.   Each chapter was labeled clearly, the story easily told, and the timing easy to follow.     I found it interesting to hear the story from a teenage perspective and from a 21 year olds point of view.   It was fun.   The way a 17 year old reacts to something and how a 21 year old reacts to something are not always so different.

I struggled with the sister relationship between Emma and Lizzie.  How could sisters hate each other so much?  I understand that the mother did nothing to help them have a relationship but that should have brought them closer together.    I also struggled with Cooper’s relationship with Lizzie when he should have been protecting Emma.     Everything was not as it seemed, but it was still a thought that came back to me over and over again.

This is a different story.   It is an easy read.   The story flows, the pages flipped, and the characters kept it interesting.   I recommend checking it out if you are looking for a fun book to cuddle up with.