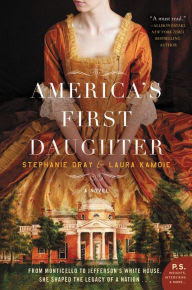 AMERICA’S FIRST DAUGHTER (William Morrow, on-sale March 1, 2016, ISBN 9780062347268; eISBN 9780062347275; audio ISBN 9780062463548), is a compelling, richly researched novel by bestselling authors Stephanie Dray and Laura Kamoie. Drawing from thousands of letters and original sources, the authors reveal the fascinating, untold story of Martha “Patsy” Jefferson Randolph, Thomas Jefferson’s eldest daughter.  Patsy was one of the most influential women in American history: not only the progeny of a founding father – and the woman who held his secrets close to her heart – but a key player in the shaping of our nation’s legacy.  And her story is one seldom told, until now.

This sweeping family saga will appeal to readers who loved The Paris Wife , The Aviator’s Wife and Mrs. Lincoln’s Dressmaker .  Early critical acclaim is incandescent, with copious praise from renowned voices such as Erika Robuck (bestselling author of Hemingway's Girl and The House Of Hawthorne ), who says, “Not since GONE WITH THE WIND has a single volume family saga so brilliantly portrayed the triumphs, trials, and sins of a family in the American South.”

AMERICA’S FIRST DAUGHTER is a poignant read, about a woman who knows that, although her father loves his family dearly, his devotion to his country runs deeper still. As Thomas Jefferson’s oldest daughter, Patsy becomes his helpmate, protector, and constant companion in the wake of her mother’s death, traveling with him when he becomes American minister to France.

It is in Paris, at the glittering court and among the first tumultuous days of revolution, that fifteen year-old Patsy learns about her father’s troubling liaison with Sally Hemings, a slave girl her own age. Meanwhile, Patsy has fallen in love—with her father’s protégé William Short, a staunch abolitionist and ambitious diplomat. Torn between love, principles, and the bonds of family, Patsy questions
whether she can choose a life as William’s wife and still be a devoted daughter.

Her choice will follow her in the years to come, to Virginia farmland, Monticello, and even the White House. And as scandal, tragedy, and poverty threaten her family, Patsy must decide how much she will sacrifice to protect her father's reputation, in the process defining not just his political legacy, but that of the nation he founded.

Historical Fiction can be so daunting.    This is a story with a lot of history shared in it and I devoured it.   I took the reading of this book slowly.  I read every word, not wanting to miss a single syllable.     The story of Patsy Jefferson is not a story I am familiar with.  Honestly, history was an incredibly boring subject to me in school and most of what I learned is long gone.

The fact that the entire story is told from a woman growing up during the Revolutionary Era is wonderful.    She is able to give facts that a man might have missed, such as the clothing, the treatment of slaves, and the politics of the men.      Most things are taboo for a women but Ms. Jefferson is let into the inside world of men due to her mother’s death and her father’s incredible need for her to be his right hand person.        Life was not easy for Patsy.   She raised 11 children, burying some before their time, raised her husband’s siblings, and dealt with the life expects of Thomas Jefferson’s family.     I really enjoyed getting a glimpse into her life and learned so much about that era, the life of families, and the history of Thomas Jefferson’s Family.

America’s First Daughter is not a light read but it is an excellent read.    I devoured it slowly, agonizingly slow at times.   Yet, I could have continued reading for another 500 pages.      This is a book I would love to have a discussion with my book club about.     I highly recommend getting your own copy. STEPHANIE DRAY is an award-winning, bestselling and two-time RITA award nominated author of historical women’s fiction. Her critically acclaimed series about Cleopatra’s daughter has been translated into eight different languages and won NJRW's Golden Leaf. As Stephanie Draven, she is a national bestselling author of genre fiction and American-set historical women's fiction. She is a frequent panelist and presenter at national writing conventions and lives near the nation's capital. Before she became a novelist, she was a lawyer, a game designer, and a teacher. Now she uses the stories of women in history to inspire the young women of today. 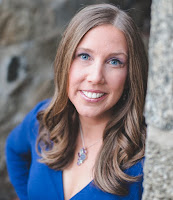 LAURA KAMOIE has always been fascinated by the people, stories, and physical presence of the
past, which led her to a lifetime of historical and archaeological study and training. She holds a doctoral degree in early American history from The College of William and Mary, published two non-fiction books on early America, and most recently held the position of Associate Professor of History at the U.S. Naval Academy before transitioning to a full-time career writing genre fiction as the New York Times bestselling author of over twenty books, Laura Kaye. Her debut historical novel, America's First Daughter, co-authored with Stephanie Dray, allowed her the exciting opportunity to combine her love of history with her passion for storytelling. Laura lives among the colonial charm of  Annapolis, Maryland with her husband and two daughters.