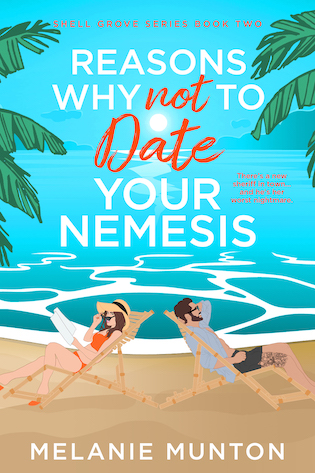 There’s a new sheriff in town…
And he’s her worst nightmare.

Reason #1: Ben Crawford is Olivia Knight’s long-time arch rival. They’ve been sworn enemies ever since she wore overalls to school one day, and he asked her in homeroom where she parked her cow. Now that he’s back, it doesn’t appear much has changed. He’s still arrogant. He’s still trouble. And this time, he’s got a badge and handcuffs. Which will make murdering him and disposing of his body much more challenging for her.

Reason #2: Sheriff Ben has done a lot of growing up during his time away from Shell Grove. He went and got himself some muscles and tattoos, and has the nerve to wear that sheriff’s uniform absurdly well. For some reason, that’s all she can seem to focus on whenever they cross paths. All the nice changes he’s made, instead of how vehemently she’s vowed to hate his guts for all eternity.

Reason #3: The complicated connection that has forever entwined their lives doesn’t have a pleasant backstory. As adults, they should be able to forget what happened when they were teenagers and move on. But in a small town where everyone has long memories, there are reminders everywhere of the nasty events that destroyed both of their families years ago. And she’s not sure their growing feelings for each other are enough to forgive the sins of the past and carve out a future…together.

Ben has a secret. A big one. The longer he’s in Shell Grove and surrounded by people who know his sordid history, the more likely that secret is going to come out. But if it does, Olivia will never speak to him again. Which will not do. Because he’s finally realized that Olivia is the reason why he came back to town in the first place. And if he doesn’t want to lose her forever, he needs to correct the mistakes he made a long time ago and prove he’s not the NEMESIS she’s always thought him to be.

Ben was barely listening to the conversation around him since a familiar tingling sensation had started crawling up the back of his neck. It was the anticipation of getting eyes on Olivia, needing eyes on her. Making sure that no one was heckling her, that she was having a good time.

Oh, who are you bullshitting? You don’t want her having a good time with another guy.

It made him a bastard, but yeah. He honestly didn’t know what he would do if he saw her flirting with another man. Probably break something. Maybe whip out his cuffs and threaten to arrest some motherfuckers. Which was completely insane. He needed to bottle that shit up immediately before the crazy started to show on his face.

Something over Finn’s shoulder caught his attention, and Ben saw red.

He took it all back. There was a motherfucker that definitely needed arresting.

The one currently chatting up his girl.

Your girl? Since when, Benny?

Some douchebag wearing a blue button-up shirt with whales all over it was smiling at Olivia from ear-to-ear as they stood next to the food truck-turned-mobile tiki bar, Freaky Tiki. He didn’t recognize the guy, but he was openly flirting with the wrong woman.

“Be right back,” he bit out to his friends and took off storming across the sand.

He’d tried to control it. It wasn’t like they had agreed to be exclusive. They weren’t even dating, for Christ’s sake. But Ben acting on his jealousy toward Olivia had become a compulsion in a remarkably short period of time. Any man that showed the slightest interest in her, he wanted to pummel into the fucking ground. He knew it was selfish and irrational and completely unfair of him. But controlling that impulse—the impulse to do something and mark his territory—was as impossible as telling his dick to chill the fuck out every time it was in her presence.

He was closing in on them before he took stock of himself.

And oh, he really should have.

The county sheriff was barreling down on The Freaky Tiki like he was about to put somebody on their ass. People on the beach got out of his way and watched him with wide eyes, probably hoping they were about to catch something on their phones they could post on their socials. But he wasn’t going to get physical with the guy. Probably not. He was just going to intimidate the hell out of him until he put at least a good twenty feet between his body and Olivia’s.

Olivia caught sight of him approaching over Moby Dick’s shoulder, her face betraying her shock.

Her companion jolted because yeah, Ben had snuck up right behind him and the guy hadn’t even noticed. Military training strikes again. It wasn’t like Moby Dick was a shrimp by any means, but Ben still had inches and pounds on him. In the physical sense, Ben didn’t feel threatened at all. But when another male started sniffing around Olivia…he saw everything as a fucking threat. A simple nod, an innocent smile. Any behavior that was targeted at her for the express purpose of showing sexual or romantic interest risked the possibility of Olivia nodding back at someone else. Of her smiling back at someone that wasn’t him. And oftentimes, smiling was a gateway to so much more.

As casual a greeting as that was, her voice was anything but. The husky quality to her words belied an intimacy between them. A personal history.

He fucking loved hearing that.

She cleared her throat and yanked her gaze away. “Um. Colin, this is Sheriff Crawford.”

Moby Dick shrewdly inspected him for a few seconds before rising to his full height that was still an inch or two shorter than Ben’s. “Nice to meet you.”

When he stuck out his hand, Ben didn’t move to shake it. In fact, he didn’t address Dick at all.

To Olivia, he gritted out, “Could I have a word?” 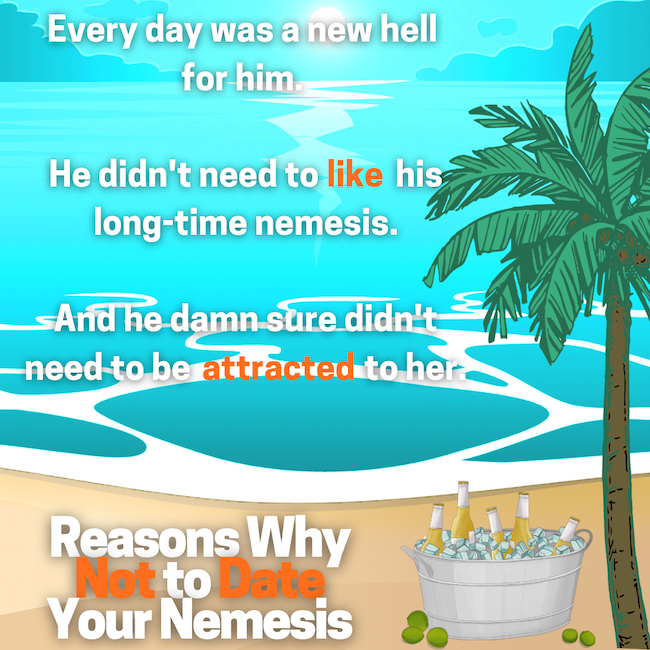 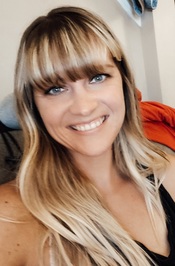 Melanie grew up in the Midwest, but she loves living in the Southeast (where the beaches are!) now with her husband and daughter.
Melanie's other passion is traveling and seeing the world. With anthropology degrees under their belts, she and her husband have made it their goal in life to see as many archaeological sites around the world as possible.
She has a horrible food addiction to pasta and candy (not together...ew). And she gets sad when her wine rack is empty.
At the end of the day, she is a true romantic at heart. She loves writing the cheesy and corny of romantic comedies, and the sassy and sexy of suspense. She aims to make her readers swoon, laugh out loud, maybe sweat a little, and above all, fall in love.
Go visit Melanie's website and sign up for her newsletter to stay updated on release dates, teasers, and other details for all of her projects!