Audiobook Review for In for a Penny by Melissa Foster 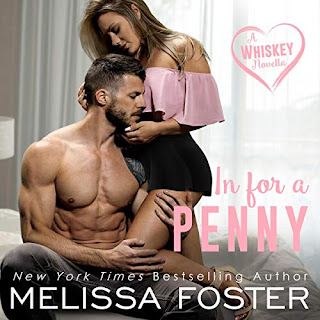 In for a Penny

Friendships and family abound during a week of love, laughter, and happily-ever-afters.

Catch up with your favorite characters and enjoy Bones and Sarah’s wedding, while falling in love with the newest Whiskey-world couple: Penny Wilson and Scott Beckley, in this Whiskey series novella.

When everything you want is right in front of you, but it's still out of reach....

Penny Wilson has a successful business, more friends than a girl could ask for, and a boyfriend she’s madly and passionately in love with. Scott Beckley is honest, loyal, hands down the best lover on the planet, and absolutely gaga over his nieces and nephews. Scott’s a keeper...as long as Penny doesn’t ever want to hear those three magical words that would take their relationship to the next level. Scott escaped abusive parents at 17, and was forced to find his way alone in the world. Even though it’s been more than a decade and he’s reunited with his estranged sisters and built a good life in Peaceful Harbor, Maryland, he’s still tortured by his past. Penny knows he loves her with everything he has, but for a girl who wants a family and a guy who is afraid of having one, love might not be enough.

The Whiskeys are perfect stories to enjoy at the beach, with depth of character, strong family ties, and a wealth of emotions. Small-town love stories with happily-ever-afters guaranteed.

Audiobook Review:  AMAZING!   Melissa Foster chooses just the right narrators for Penny and Scott’s story.  Ava Erickson has the perfect voice and tone for Penny’s part of the story.   She has the voice that I can hear Penny’s love for Scott while also hearing her angst at the feelings she has.  Tor Thom is rough and tough as Scott.  He shares the difficult past that Scott has while showing his softer sexy side he has when Penny is around.

eBook Review:  Have you ever read a book and wondered about the characters that were not the main one? In for a Penny is the story of Penny Wilson and Scott Beckley, who have been secondary characters in many of Melissa Foster’s book. They are two of the many characters that add so much to the books they are in but have not been featured in their own book. Today that ends! Penny and Scott have gotten their own novella and I devoured it.

In for a Penny is a novella but it tells a complete story. The story of Penny and Scott enjoying their relationship, opening their hearts, and learn to let each other in. Scott’s history is holding him back from letting Penny entirely into his life. Penny knows that he is holding back and is not willing to settle for anything less then everything. Theirs is an emotional story filled with fun, flirting, steamy encounters, trust, and tears.


The bonus, we get to witness Bones and Sarah’s wedding. The cute little ones dressed up, the love in their eyes, and the joining of two beautiful loving people.

*I received this book from Audible in exchange for my honest review.