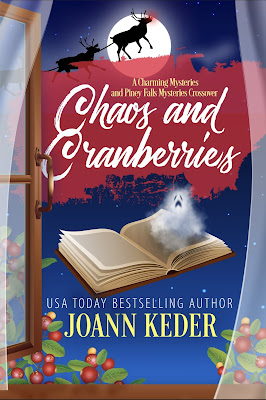 Paranormal investigator, Feather Jones and her boyfriend, Tug have arrived in picturesque Piney Falls for their Christmas getaway. To their dismay, they learn that their suite isn’t available because the last guest, author Dash Vixen, never checked out.

Dash was murdered when a copy of his own horror Christmas anthology was used to beat him to death.

Coming to their rescue is local sleuth, Lanie Anders, who invites them to spend the holiday with her and her husband. Unbeknownst to all of them, the murderer has bigger plans. Soon Lanie, Feather and their respective other halves are embroiled in a mystery that will stretch them both to their crime-solving limits!

This is a crossover book: Feather is a sleuth from the Charming Mysteries series and Lanie is a sleuth in the Piney Falls Mysteries.

Ivy Merrilee Globe was a prolific author, completing seventy-nine books in her twenty-six years of life. Her most recent, Snowily Severed, was a short story featured in the massively popular Christmas horror anthology, Strung by the Fire.

She recently signed a contract with Brain Gravy Pictures to turn her short story into a movie.

Driving home from physical therapy, she stopped for children crossing three blocks from her home, when her neighbor's sleigh ornament slid off the roof of their home and through her car windshield, impaling her. Ivy herself couldn't have written such a dramatic end.

Ivy leaves behind three brothers and a cat named Ice.

"She didn't die on the twenty-second like the other two. Find the date of the Frosty attack, Lanie," Vem urged.

I typed in the information and when the page came up, our mood was somber. "Ivy was attacked on the twenty-second by the Frosty wannabe. They intended to kill her that day, and when it didn't work, they came back to finish the job."

My phone rang and I jumped up to answer. Even though we'd been together for several years, I was always expecting his call.

"Mrs. Hill? This is the Tucson police department." 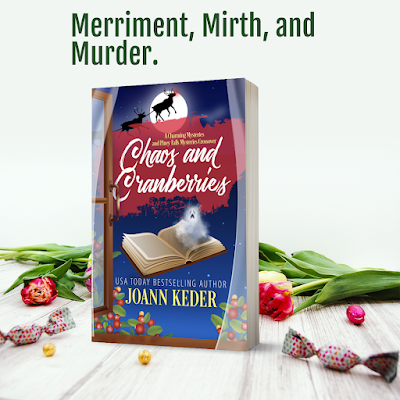 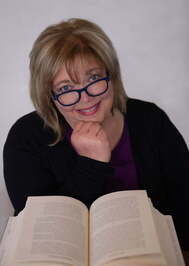 AUTHOR BIO:
USA TODAY bestselling author, Joann Keder spent most of her years in the Midwest, growing up and raising a family on the Great Plains of Nebraska. She worked for sixteen years as a piano teacher before returning to school to receive a master's degree in creative writing. A mid-life move to the Pacific Northwest led her to re-examine her priorities. She now creates stories about life and relationships in small towns while her ever-patient husband encourages her on.
Author links:
https://www.joannkeder.com/
https://www.instagram.com/joannkeder_author/
https://www.facebook.com/jkederauthor/
https://www.goodreads.com/author/show/3266457.Joann_Keder
a Rafflecopter giveaway