Book Blitz for The Ack Ack Girl by Chris Karlsen 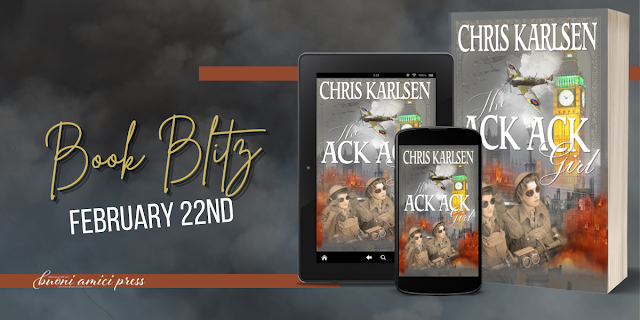 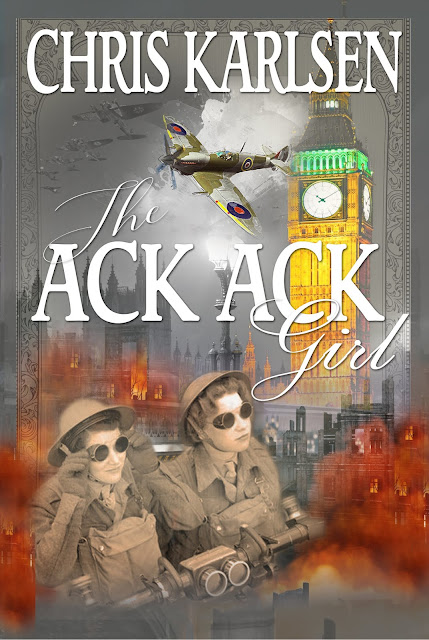 In 1941, the German war machine had conquered all of Europe, only England remains free. Hitler knows to invade England the Luftwaffe must defeat the Royal Air Force. While under constant attack, the valiant pilots of the RAF manage to keep the enemy from executing an invasion. But the RAF suffers great losses. England is in desperate need of more pilots. As a result, the government takes a huge chance and establishes unique teams of women known as Ack Ack Girls. These women are trained to work anti-aircraft units, freeing men up for other combat details.

The Ack Ack teams are high risk assignments, targeted by enemy bombers and fighter planes. Ack Ack Girls must be courageous and quick-witted. Ava Armstrong is excited to be chosen to be among them. Her anti-aircraft unit borders a major RAF base where several squadrons of pilots are deployed. Chris Fairfield, who earned a Distinguished Flying Cross in the Battle of Britain, is one of pilots stationed by Ava’s unit.

When Ava and Chris’s paths cross, sparks fly. War lends an urgency to life and love. Their romance grows deep and strong despite the danger that surrounds their daily lives. After the men in Chris’s squad see his plane get shot down, Ava is told he went down in flames and cannot have survived.

Logic says the men who were with him that day are right in believing him dead.

Ava put her new uniform bits away. Someone had left a flyer for a pub called the Two Roses in her stand. Skimming it as she headed toward the mess she ran into a solid body. “Have a care, watch where you walk. You nearly trod on my foot.” Startled, Ava looked up into a square-jawed, dark-haired pilot with a dimpled chin, who could pass for Cary Grant’s younger brother. Distracted, apologizing escaped her. “I’d say I accept your apology had I received one.” “Sorry, I was reading this flyer.” He eyed her up and down. “You’re part of the new anti-aircraft branch of the ATS.” “I am.” He eyed the length of her again but this time a snort accompanied his comment. “I hope you can see planes better than tall men inches from you.” The cheek of the man! She wasn’t about to let that comment slide. “Had you considered stepping out of the way when you saw me coming?”“No, why should I? I was in this spot first. You’re lucky I don’t ask the captain to have your lot stop to salute us.” “What cheek. Pardon me, I’m hungry and you’re boring.” Ava tucked the flyer into her jacket pocket and whispered, “Wanker” as she pushed past. The wanker hummed White Cliffs of Dover and got in line behind her. “Lieutenant Fairfield, it’s good to see you here. Finally on the mend?” the blonde, ATS corporal serving the food asked the wanker in a sugary voice. “I still have the tail-end of the nasty pneumonia cough hanging on, but I believe I’ll be ready to return to my squadron this week.” “We might see you around before then. When we have a bit of time to ourselves, my friends and I go for a pint at the Two Roses pub in the village. Come by and I’ll buy you a pint.” “If they don’t send me off the same day as my orders come through, I’ll do that but I’ll buy.” Ava made a note to ask what village they were near. No one had indicated so far and she was curious. She didn’t dare ask in front of the arrogant wanker Fairfield. He already thought her a clumsy goose. No need letting him think she was lost too. She moved down the food line, pausing for a second trying to decide if she wanted the soupy mashed potatoes. Then a long, blue wool uniformed arm reached over her to take a roll, his tray clinking against hers. “Excuse my reach but you’re taking too long and I’m ravenous.” “You really are a wanker.” “You wound me.” He pressed his hand to his chest. “At least I’m not a dawdler.” He walked away with his roll before she could offer a comeback. 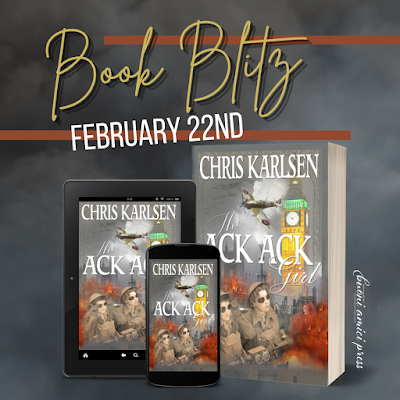 I was born and raised in Chicago. My father was a history professor and my mother was, and is, a voracious reader. I grew up with a love of history and books.

My parents also love traveling, a passion they passed onto me. I wanted to see the places I read about, see the land and monuments from the time periods that fascinated me. I’ve had the good fortune to travel extensively throughout Europe, the Near East, and North Africa.

I am a retired police detective. I spent twenty-five years in law enforcement with two different agencies. My desire to write came in my early teens. After I retired, I decided to pursue that dream. I write three different series. My paranormal romance series is called, Knights in Time. My romantic thriller series is Dangerous Waters. The newest is The Bloodstone Series. Each series has a different setting and some cross time periods, which I find fun to write.

I currently live in the Pacific Northwest with my husband and five wild and crazy rescue dogs.