Review for In a Holidaze by Christina Lauren

In a Holidaze  by  Christina Lauren 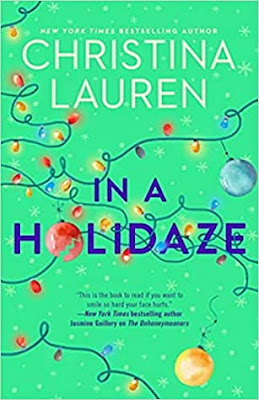 One Christmas wish, two brothers, and a lifetime of hope are on the line for hapless Maelyn Jones in In a Holidaze, the quintessential holiday romantic novel by Christina Lauren, the New York Times bestselling author of The Unhoneymooners.

It’s the most wonderful time of the year…but not for Maelyn Jones. She’s living with her parents, hates her going-nowhere job, and has just made a romantic error of epic proportions.

But perhaps worst of all, this is the last Christmas Mae will be at her favorite place in the world—the snowy Utah cabin where she and her family have spent every holiday since she was born, along with two other beloved families. Mentally melting down as she drives away from the cabin for the final time, Mae throws out what she thinks is a simple plea to the universe: Please. Show me what will make me happy.

The next thing she knows, tires screech and metal collides, everything goes black. But when Mae gasps awake…she’s on an airplane bound for Utah, where she begins the same holiday all over again. With one hilarious disaster after another sending her back to the plane, Mae must figure out how to break free of the strange time loop—and finally get her true love under the mistletoe.

Jam-packed with yuletide cheer, an unforgettable cast of characters, and Christina Lauren’s trademark “downright hilarious” (Helen Hoang, author of The Bride Test) hijinks, this swoon-worthy romantic read will make you believe in the power of wishes and the magic of the holidays.

My first holiday book of the year.   In a Holidaze was a fun Groundhog Dayish story.    Maelyn Jones is reliving her Christmas at the Utah cabin over and over.   I wasn’t sure how this would play out; would it be the same ol’ story just being retold?   How would the days be different when she is just reliving the same timeframe?   I will admit that at the beginning I was ready to put the book down but then Maelyn stuck.   She did not relive her time and the story got better.

I loved the family vibe of the story.   The fact that the same people got together every year, no matter what was going on in their lives, to celebrate the holidays together at the Utah cabin just as their tradition called for.  Bennie was a fun character.   He was the weed smoking, mushroom hiding, friend of Maelyn’s dad that was like the fun uncle that everyone knew they could go to for anything they needed.     Each character had quirks but as they all got together they fit together as a dysfunctional family with lots of love and support to give.

In a Holidaze was a fun and quirky winter setting book to read.   If you are looking for a quick and easy book this is the perfect book for you.

**Thank you NetGalley and Gallery Books for a copy of the book in exchange for my honest review.

Yes, there are two of us! Lauren (on the left) and Christina (on the right). 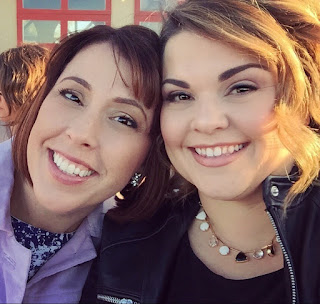 Christina Lauren is the combined pen name of long-time writing partners and best friends Christina Hobbs and Lauren Billings. The #1 international bestselling coauthor duo writes both Young Adult and Adult Fiction, and together has produced fifteen New York Times bestselling novels. They are published in over 30 languages, have received multiple starred reviews, won both the Seal of Excellence and Book of the Year from RT Magazine, been inducted into the Library Reads Hall of Fame, named Amazon and Audible Romance of the Year, a Lambda Literary Award finalist and been nominated for several Goodreads Choice Awards. They have been featured in publications such as Forbes, The Atlantic, The Washington Post, Time, Entertainment Weekly, People, O Magazine and more. Their third YA novel, Autoboyography was released in 2017 to critical acclaim, followed by  Roomies, Love and Other Words, Josh and Hazel’s Guide to Not Dating, My Favorite Half-Night Stand, and the Publisher’s Weekly, Kirkus, and Library Journal starred The Unhoneymooners, out May 2019.

Lauren Billings (but everyone calls her Lo) has a Ph.D. in neuroscience and before she made writing her full-time job, would spend her days doing nerdy research-type things wearing a lab coat and goggles. She is silly Mommy to two littles, wife to one mountain biking homebrewing scientist, and an unabashed lover of YA and romance.

Christina Hobbs (but you’ll always hear Lo call her PQ) used to spend her days in a junior high counseling office surrounded by teenagers. These days you can find her at her desk, writing or watching BTS videos. She lives in Utah with her husband and daughter, thinks she’s the luckiest person in the world to write books with her best friend, and is an unapologetic lover of boy bands and glitter.