Review for Reviving the Hawthorn Sisters by Emily Carpenter 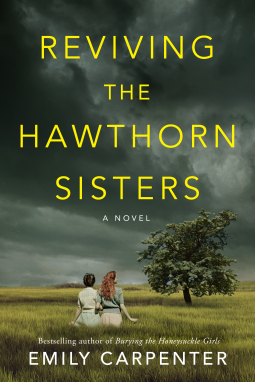 The bestselling author of Burying the Honeysuckle Girls returns to uncover a faith healer’s elusive and haunted past.

Dove Jarrod was a renowned evangelist and faith healer. Only her granddaughter, Eve Candler, knows that Dove was a con artist. In the eight years since Dove’s death, Eve has maintained Dove’s charitable foundation—and her lies. But just as a documentary team wraps up a shoot about the miracle worker, Eve is assaulted by a vengeful stranger intent on exposing what could be Dove’s darkest secret: murder…

Tuscaloosa, 1934: a wily young orphan escapes the psychiatric hospital where she was born. When she joins the itinerant inspirational duo the Hawthorn Sisters, the road ahead is one of stirring new possibilities. And with an obsessive predator on her trail, one of untold dangers. For a young girl to survive, desperate choices must be made.

Now, to protect her family, Eve will join forces with the investigative filmmaker and one of Dove’s friends, risking everything to unravel the truth behind the accusations against her grandmother. But will the truth set her free or set her world on fire?

A family with secrets, secrets that threaten to expose their grandmother as a fraud and derail the foundation that was started in her name.  Many families have secrets, but most are not as potentially harmful as what Eve knows and what she is threatened with.    As Eve works to unravel the mystery of Dove and to prove that murder was not part of Dove’s past, there are new secrets revealed, new relationships formed, and the threat of losing her life.

I loved the mystery and intrigue in the story.    Following the clues, putting together the information, and trying to guess what will happen next kept me turning pages and staying up past my bedtime.    I loved Eve, she stood by her family even as her whole life in threatened.   As the story continued, I found that her strength, her sense of family, and her need for the truth made her a character that I was cheering for.   I was cheering for her to stay safe, to find out what had really happened to Dove, and to find a happy ending for herself.

Reviving the Hawthorn Sisters is a book that I recommend picking up a copy of.   I’ve been told it is a follow-up to Emily Carpenter’s  Burying the Honeysuckle, but I have not read the first book and this one did not read as part of a series so I would say that the books do not have to be read in order.