Release Blitz for The Lost Link by Michelle Bryan

THE LOST LINK by Michelle Bryan is out now! Check out the fantastic new paranormal romance and be sure to grab your copy today! 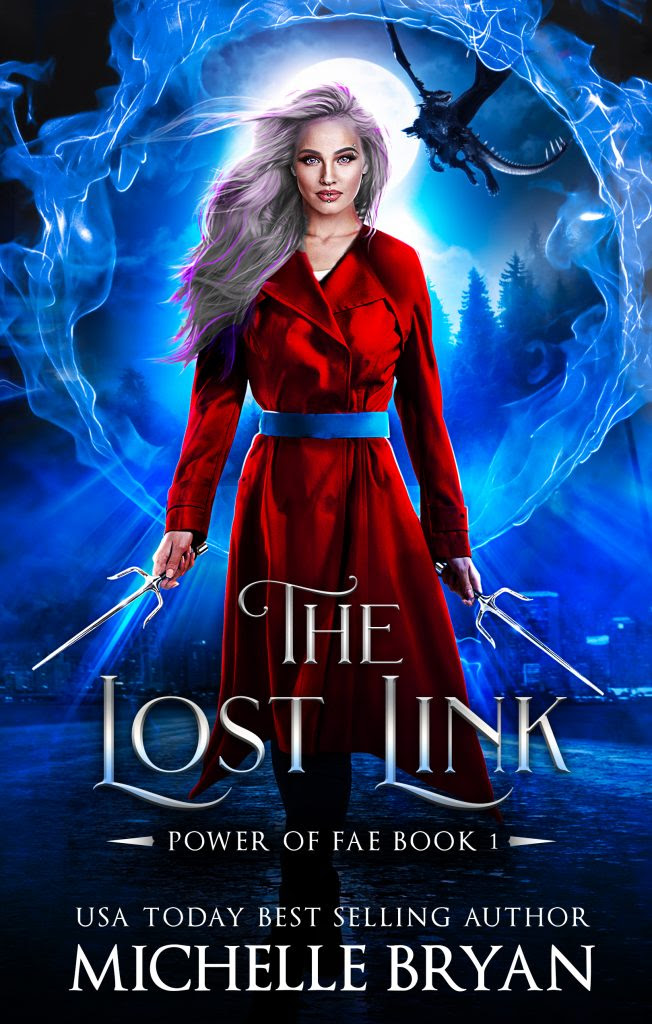 About The Lost Link:

I die every night in my dreams. Add to that the hallucinations of people I've never met and creatures that don't exist, and you can see why I don’t let anyone in. People don't take well to weirdos that can't tell reality from illusion. That all changed the day a dragon attacked. Yup, that’s right. A real-life, smoke-breathing dragon hunted me down in the middle of a school day. I only escaped because a Faerie forced me to jump through a fire portal into a realm of magic. Normal, right? Just when I thought things couldn't get any weirder, I met him. The Fae prince. Eyes of jade, ebony hair, and a smile that made my knees weak. Too bad he was my mortal enemy sent to finish what the dragon started. Now, faced with parallel worlds, a daring escape plan, and an evil queen bent on taking over the universe, only one thing is for certain. I’m in way over my head.

Unlike my early morning hallucination of him, Zorro appeared fully fleshed out this time. His dark hair was cropped tight to his head, with a hairline that dipped into a widow’s peak. His golden skin was bronzed darker across the planes of his face—high cheekbones chiseled by the gods, strong jaw, straight nose. Dark fringed eyes so emerald green it looked like he was wearing a pair of cheap colored contacts. On his hip a long, broad sword hung, his hand lightly touching the red hilt, and his sleeves pushed up over forearms tanned and corded with muscle. His hands and arms were covered in markings, etched both with scars and tattoos. Beautiful as he was, he was forbidding and scary, and a chill encapsulated my whole body. I found myself drawn back to those eyes. Luminous, mesmerizing and achingly beautiful, they drew me in like a moth to a flame. I think I even took a couple of steps closer before the jolt of electricity in my wrist brought me to my senses. My birthmark caught aflame and buzzed over my skin in response to his presence, no doubt. Every single nerve ending reacted, from my toes to the roots of my hair. Pulling me toward him like I was some old nail and he was giant magnet. What the hell was happening here? My brain yelled at me to run, but did I listen? No. I took another step closer. I couldn’t help myself even though my gut was telling me this man equated danger. Just as dangerous as the beast I was running from. Then Zorro grinned. A thousand-watt smile emphasized with deep dimples in both stubbled cheeks and I rooted in place like I’d just stepped in quicksand. I still wasn’t sure where ‘here’ was, but they had a hell of a dentistry service from the look of those teeth. Man coulda made a killing doing toothpaste commercials, for sure. The hand holding the hilt of the massive sword relaxed its grip, and I breathed a little easier. Okay. He obviously didn’t consider me a threat. Good to know he wasn’t about to lop my head off. I lowered my fists as he crossed his arms and my gaze jumped from the tats to the broad chest and wide shoulders. My eyes dropped lower, down to the narrow waist emphasized by the sword sheath hanging low on his hips, and muscled thighs encased in tight pants. Denim? Leather? I wasn’t sure. What I did know was that he filled ‘em out damn fine. “Hello, Bridjette. It’s good to see you too.” His smooth voice glided over me with the softness of a silk sheet, and gave my goosebumps, goosebumps. The way he emphasized see, however, told me he was well aware of where my eyes were situated right now. Heat infused my cheeks and I yanked my gaze back to his amused face. A million questions banged around my brain, but my tongue refused to utter a single one. It stayed stuck to the roof of my mouth as I swallowed a dozen times trying to unglue it. His eyes alit with green fire stared into mine, so intent a heated blush encompassed my entire body and my knees weakened. I swear I could feel the charisma oozing from his damn pores. Was he putting a spell on me or something? Finally, I managed to croak, “You can’t be real.” Closing my eyes, I released a pent-up breath, blowing the hair plastered to my forehead. “None of this is real, Jette. You need to find the closest pharmacy else the next article of clothing you’ll be rocking will be a straitjacket.” 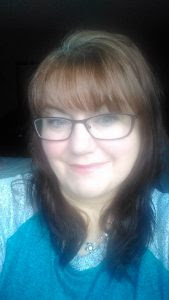 I wish I could say I've climbed Mt. Everest or ridden in a hot air balloon around the world, but alas I lead a very quiet life in Nova Scotia, Canada. The only adventures I go on are in my books. But what adventures they are! When I'm not reading or writing I have a day (bill paying) job as a chocolate shop manager. So yes, I work with both books and chocolate! Living the dream. The rest of my time is spent with my three favourite guys; my hubby, my son and my crazy fur baby. We are a family of geeks, fans of Game of Thrones and The Walking Dead, lovers of books and players of video games. I wouldn't have it any other way.