Today I am celebrating the paperback release of Feared by Lisa Scottoline.   I reviewed the Hard Cover of the book when it was release in 2018 and now you can get it in paperback. 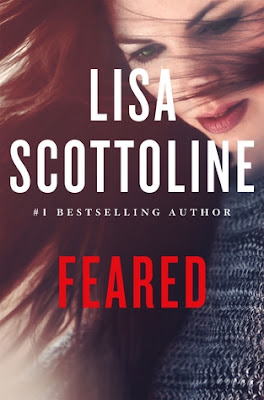 When three men announce that they are suing the Rosato & DiNunzio law firm for reverse sex discrimination—claiming that they were not hired because they were men—Mary DiNunzio and Bennie Rosato are outraged. To make matters worse, their one male employee, John Foxman, intends to resign, claiming that there is some truth to this case.

The plaintiffs’ lawyer is Nick Machiavelli, who has already lost to Mary once and is now back with a vengeance —determined not to not only win, but destroy the firm. It soon becomes clear that Machiavelli will do anything in his power to achieve his end…even after the case turns deadly. The stakes have never been higher for Mary and her associates as they try to keep Machiavelli at bay, solve a murder, and save the law firm they love…or they could lose everything they’ve worked for. Told with Scottoline's trademark gift for twists, turns, heart, and humanity, this latest thriller asks the question: Is it better to be loved, or feared...

Feared, the sixth entry in the acclaimed Rosato & DiNunzio series, expertly explores what happens when we are tempted to give in to our own inner darkness.

Feared is an amazing legal thriller.  It is book #6 of the series but can easily be read without reading the rest of the books.     As with most standalone series, reading them in order gives the reader more background to the story and the character but this book in wonderful on its own.
In Feared we find the women of the law firm going against Nick Machiavelli.   He holds a grudge against Rosato & DiNunzio after losing to them in a past case.    The case is a reverse sex discrimination case, three men are accusing Rosato & DiNunzio of not hiring them because they were men and the law firm is all women.     Mary and Bennie along with the rest of their law firm stay strong, work together, and figure out how to fight fire with fire.   From the beginning there is no doubt that the women will win, the women will stay strong and figure out how to save their jobs and their lives.

In this book, we get an inside look at the home lives of the women.    They head home to get dirt on Nick since he was from a family in the neighborhood.  I loved seeing how these strong Italian families get together, protect each other, and fight for themselves.    I liked seeing how their families come first, religion holds a strong place in their lives, and how family included all those who live in the neighborhood.

Lisa Scottoline is a must-read author, this series is one of my favorites, and I will always recommend everyone read them.


Purchase on Amazon or Barnes and Noble
Posted by A Soccer Mom's Book Blog at 10:00 AM