REVIEW of The Exes' Revenge by Jo Jakeman 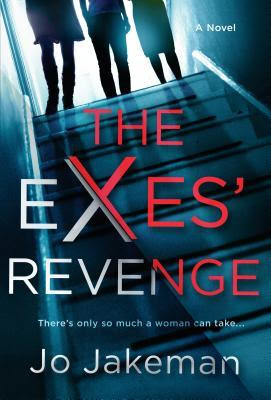 A wickedly dark debut thriller about three women who've all been involved with the same man and realize the one thing they have in common is that they all want revenge against him...

Divorces are often messy, and Imogen's is no exception. Phillip Rochester is controlling, abusive, and determined to make things as difficult as possible. When he shows up without warning demanding that Imogen move out of their house by the end of the month or he'll sue for sole custody of their young son, Imogen is ready to snap.

In a moment of madness, Imogen does something unthinkable--something that puts her in control for the first time in years. She's desperate to protect her son and to claim authority over her own life.

But she wasn't expecting both Phillip's ex-wife and new girlfriend to get tangled up in her plans. These three very different women--and unlikely allies--reluctantly team up to take revenge against a man who has wronged them all.

This is an emotional, psychological thriller.   Three women, 2 wives, and a girlfriend, are forced to show an abuse husband/boyfriend exactly how fed up they are with him.    The first wife has her blinders on, the second has a son with the abuser, and the third wants to marry him.   From the very beginning, I wasn’t sure who I could trust.    While there is never any excuse for abuse I felt like there should be more to the story.    There had to be another side to Phillip and the three woman’s story.  Boy, did I learn that story.

The Exe’s Revenge is unique in that you know from the very beginning that Phillip dies, that is how the book starts.    Now, you have to read the rest of the story to find out the why, when, and how of his death.   It is not quite as you would expect.    There were the hard parts, the physical abuse parts, but there was also a little bit of dark humor, friendships formed, trust gained or lost, and twists that I didn’t see coming.

I have no doubt that this will not be a book that everyone will enjoy.   I personally really liked it.   I was pulled in, had to keep reading, and actually just recommending it to a book club group.