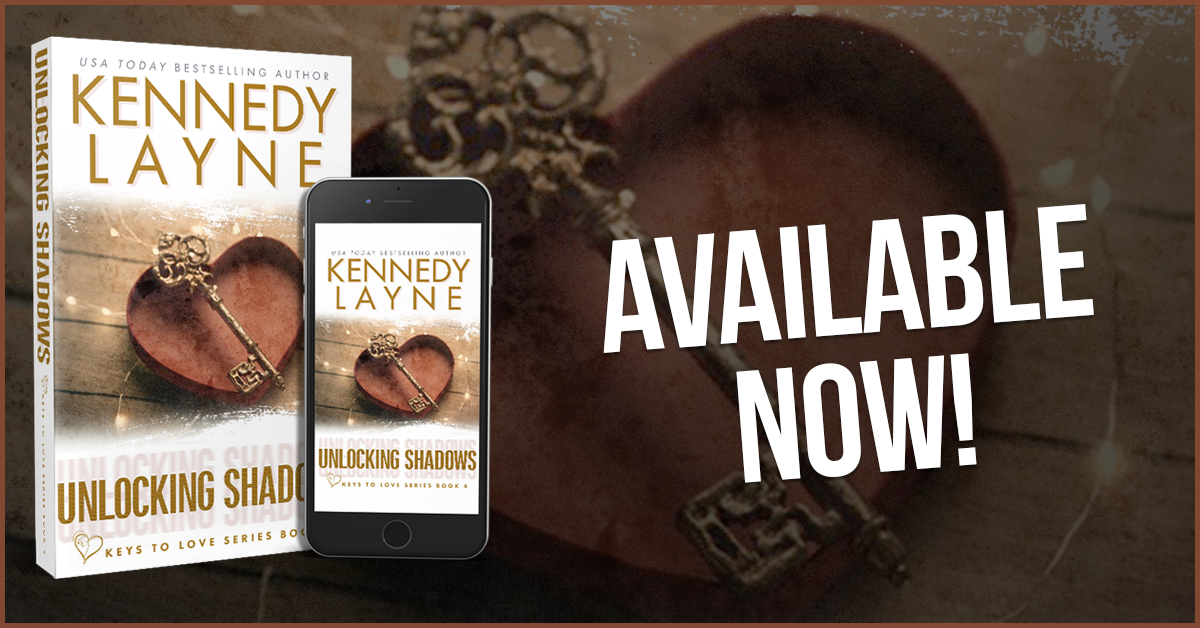 UNLOCKING SHADOWS by Kennedy Layne is available now! Read a sneak peek below and pick up this next installment in a gripping romantic suspense series - you don't want to miss it! 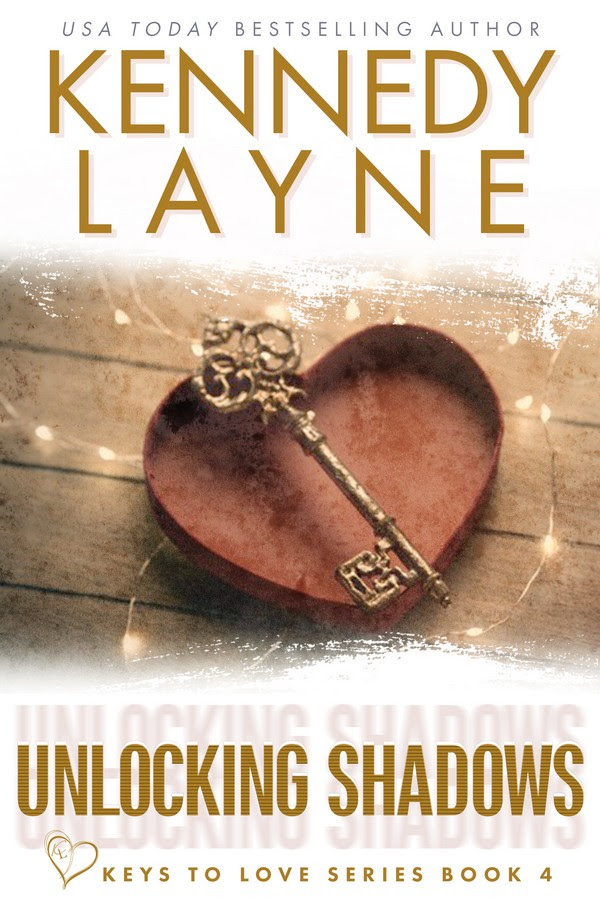 Gwen Kendall spent ten years in the Navy and used the last four to create a life for herself she could be proud of away from the confines of her overprotective family. Being the only woman in the Kendall clan tended to be a bit overwhelming at times.
Chad Schaeffer had been hired on to help restore an old farmhouse for one of the returning Kendall siblings. He’d heard about the trouble the family had encountered and honestly didn’t want to go anywhere near their properties. He had a change of heart when he saw the most recently returned Kendall sibling stepping out of her car with a key in her hand.
Gwen had waited a very long time to have a place to call her own, just as she had waited for the right man to share her life. One night of seduction convinces her she’s found both, but someone wants to take it all away. It’s been said that old houses retain a piece of each person who has lived there, but she never counted on the dark shadows wanting a piece of her. 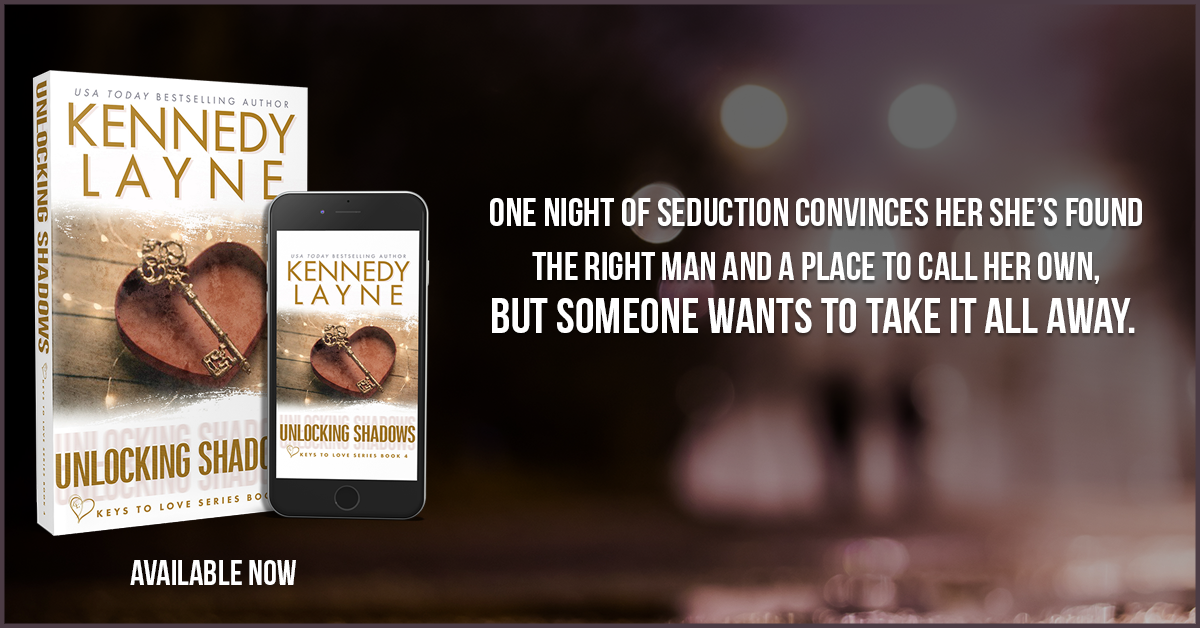 Gwen Kendall sure as hell didn’t belong in Blyth Lake. Shiny black hair that resembled the luminous color of a raven was flawlessly cut to frame her sculpted face. Her porcelain skin surpassed the most beautiful porcelain doll, while her full lips were smoothly covered with red lipstick that basically begged to be worn off. She also had a figure that rivaled that of any obsolete hourglass. Gus and Noah’s abrupt manifestation by Gwen’s side was a wakeup call, and Chad had to clear his throat so that he could call out a greeting. That last thing he needed to do was act like an imbecile in front of Gwen while Noah and their father looked on. He was a grown ass adult, but even he agreed the word ass should be emphasized considering his reaction. One would think he’d never seen a beautiful woman before. Chad discreetly rubbed his eyes as he leaned against the white pillar of the wraparound porch that had been painted to draw in buyers, though that time was well over a few years ago. The previous owners only had so much discretionary income to put into the house, so they had chosen mostly surface elements to polish the curb appeal, as they called it. Which was a great reminder that the external shell didn’t always represent what was on the inside. For all he knew, Gwen’s time away had stolen her shy demeanor and she was hell on heels— not that she was wearing heels out here today. “Chad, it’s been a long time.” He was so fucked. Gwen smiled brightly as she looked up at him from the sidewalk, her melodic voice like honey being slowly dripped down his skin. Fortunately, she waited until she’d taken the two steps to be by his side to hold out her arm in greeting. He now had a better rein on his responses and didn’t even let on that the faint scent of vanilla enveloped him as her fingers ever so slowly closed around his. “It’s good to see you back, Gwen.” Chad was grateful for an excuse to release her hand, extending his arm to Gus. The older man was friends with Miles and had been for years. It was good that there didn’t seem to be any animosity between the two regarding Clay’s recent stupidity. Their families were now too connected and entwined for there to be any residual hostility… or so Chad kept telling himself that on a daily basis. “Are you here by yourself?” Gwen’s question threw him a bit, but he caught himself before showing his surprise. He didn’t miss Noah’s wince, though. There had apparently been a conversation about Clayton’s recent lapse in judgement, and of course, Wes and Chad were guilty just by association. It didn’t matter that their older brother made his own choices. Gwen had clearly made up her mind about the Schaeffer men. If that’s how she wanted to play it, then that was fine by him. “Yes,” Chad replied, letting her know in no uncertain terms by his steel tone that he was capable of keeping this professional moving forward from this point. “I was going to be the one handling your project, for the most part. If you’d prefer someone else heading up the renovations, I’m sure Noah can make a good recommendation.” Gwen Kendall was the prime example of how one shouldn’t judge a book by its cover. He should have known better, too. Well, he got her message across loud and clear. Chad would do them both a favor and stay far away from wherever she showed her pretty face in town.

About the Keys to Love Series

Their homecoming wasn’t so welcoming. Four brothers and one sister each gave twelve years of their lives to serve their country and fulfill their family’s legacy of service. As each of them return to their home of record, they weren’t prepared for what awaited them—an unforgivable sin that has been hidden for twelve long years. Secrets and lies are concealed in the dark shadows of the very town they were raised in, and the Kendall family will have no choice but to rely on one another to unravel the sinister evil that they all hold the keys to unlock.

Missed UNLOCKING FEAR and want to catch up? You can grab the first book in the Keys to Love series for free now!

A chance mishap with a sledgehammer was the sole reason a chilling nightmare was unleashed in Blyth Lake.
Noah Kendall’s grisly discovery left him in the middle of a murder investigation and a neighbor who knew more than she was willing to say. Reese Woodward had returned to town with dark secrets, and he was determined to unravel them. While evil lurks in the darkness, seduction burns between them…only time was their enemy.
Will her secrets destroy what they’ve built, or can he earn her trust before the killer strikes again?
Add UNLOCKING FEAR to your Goodreads list here!
Get your copy of UNLOCKING FEAR now!
✦Amazon http://amzn.to/2oDD6Tg ✦iBooks http://apple.co/2ouRvO6 ✦Barnes and Noble http://bit.ly/2AYCo5e ✦Kobo http://bit.ly/2odmleE