REVIEW of Paradise by the Dashboard Light by Kathryn R. Biel 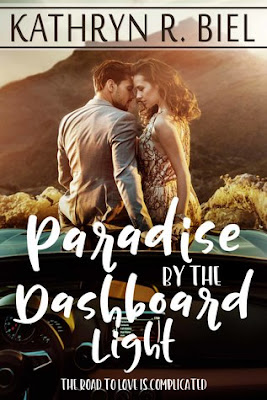 It doesn't get more complicated than sleeping with your twin sister's boyfriend ... unless he doesn't even realize he slept with the wrong sister. But that was ten years ago and Rio Pascucci doesn't do complicated—anymore. She's as hard-working, straight-forward as they come. She put that mess behind her when she left her train-wreck of a twin sister back in Ohio. Now, independent Rio is unprepared for this twist. His name is Ian McCallister, and this is where it gets tricky.

Ian and Rio were best friends growing up. Complication #1: The friend zone.

Rio's been in love with Ian for as long as she can remember. Complication #2: Unrequited love.

Ian was in love with Rio's twin sister. Complication #3: Will he ever see her as anything but a replacement for his first love?

Oh, and then there's that little secret Rio's hiding. Complication #4: Deceit and lies.

Rio and Ian may have been born for each other but when the odds are stacked against you, are some things just too complicated to overcome?

From the start the idea of two sets of twins born hours apart, in the same hospital, and then they grow up together sounded intriguing.     The families could not have been more opposite each other.    Rio and Rianne had a father who left them and a mother who was more interested in her newest man than her own children.   Ian and Evan have two loving parents but Evan was born with a birth defect while Ian was born as a natural athlete and all around good child.  The girls were lucky that Ian and Evan’s mother was around to help raise them.   Too bad the good didn’t rub off on both girls.

I read this book in one sitting.    I could not stop and was invested in the characters and the storyline.     I was wishing that Rio would open up to Ian sooner and the secret between them would come out before it would explode in her face but hey… Kathryn Biel knows what makes a good story.    I am a fan of Kathryn’s read everything of hers that I can get my hands on.    She never disappoints and I always walk away satisfied with what I have read.