We are so excited to be sharing the release of Samantha Chase's ONE MORE PROMISE, the latest standalone in her Band on the Run series. Contemporary romance lovers won't want to miss this rockstar romance--be sure to grab your copy today!

About ONE MORE PROMISE

Dylan Anders is making amends ...to his family ...to the public ...for letting everyone down Paige Walters has something to prove ...to her busy father ...to her bossy sister ...but mostly to herself Ambitious Paige Walters is ecstatic when she's hired to recruit celebrities for a children's literacy campaign - it's her chance to prove she's got the chops to make it in the family business. She certainly isn't going to let some fallen idol screw it up. But as the work brings Paige and Dylan closer together, their attraction grows...and so do their challenges. 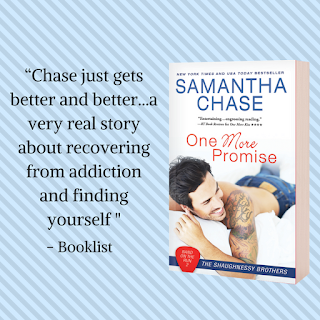 One More Promise is a book that I could not put down.   I was excited to keep reading about Paige and Dylan.   The story had spunk, love, strong characters, a fun setting, and a great storyline.     I loved that the characters were relatable, even the famous band members.      There were unlikable characters that were necessary for the story to flow and be true to life but most were likable.

My feelings while reading were up and down.  I laughed, I sighed in contentment, I smiled, and I had tears all while reading page after page of this wonderful story.    I laughed at the fun Dylan and Nora had.  I was content with their relationship and how real it was.   I cried at how both characters were treated by friends and family but loved how strong they both were, especially when they were together.    I was in awe of how together these two were able to conquer anything.

This is the perfect heartwarming and loving story.     The characters were amazing and the storyline was fast paced.  I recommend picking up your own copy and enjoying the story of Nora and Jack.

Thank you Beth Sochacki at Sourcebooks Casablanca for a copy of the book in exchange for an honest review.

Get your copy of ONE MORE PROMISE today!

Read an excerpt of ONE MORE PROMISE now

“Dylan…wait.” Looking over his shoulder at her, he waited. “Sorry. I didn’t mean to snap at you.” He smiled. For some reason, she was starting to enjoy seeing him smile. As much as she hated to admit it, Dylan Anders was becoming a friend with whom she enjoyed spending time. Paige no longer looked at their time together as a chore, but rather a perk. Their conversations were always fun and he was quite pleasant to look at. Not that she went for the scruffy, rock-star type. At least, she never had until now. But Paige was far too intelligent to think that someone like Dylan would give her a second look. He was being nice to her because he had to. Or felt like he had to. They had formed a friendship and that was that. During her Google searches, she’d found a plethora of pictures of Dylan with various models and other beautiful and glamorous women. Tall, thin, sexy women. If there was one thing Paige knew about herself, it was how she certainly didn’t fit into that category. So what if he remembered her favorite sandwich and made sure she had something to eat? He was being nice. Still…no one else around her seemed to care if she hadn’t eaten. And so what if he was concerned about her stressing herself out and tried to find a helpful solution? He was probably bored and looking for something to do to pass the time and figured, as his official assistant/babysitter, she’d be open to entertaining him. Only…it felt like more. Like he was a genuinely nice guy who put the needs of others before his own. Or was she seeing something that she only wanted to see? True, it had been far too long since she’d been in a relationship or even went out on a date. Maybe she was a little…needy, in the male-companion territory. And it didn’t help that he was so attractive. “Dammit,” she muttered. “You okay?” Dylan asked. Crap! She hadn’t meant to say anything out loud. “It’s nothing,” she said quickly. “I just hate that everyone isn’t here yet. I should probably make some calls and see what’s going on.” “You mean call your sister and let her know that she needs to call the talent?” he asked sweetly. And if she hadn’t found his smile so darn attractive, she’d want to slap it right off his face. “No,” she said with a hint of irritation. “We’re on the clock and people need to get here now. I’m not starting a phone tree. Excuse me.” As she pulled out her phone to start making calls, Dylan gave a small shrug and walked over to where a couple of other musicians who were now part of the campaign were sitting. Great. He had to have a sexy ass that looked amazing in a pair of faded jeans. A-ma-zing. Fairly grab-able. “Ugh…I really need to stop thinking like this,” she said with a weary sigh and startled when a voice answered on the other end of the phone.

Don't miss the first book in the Band on the Run series!

About ONE MORE KISS

MATT REED IS HIDING ...from his fans ...from his past ...from a failure too painful to contemplate Most of all, Matt is hiding from himself. VIVIENNE FORRESTER IS A WOMAN WHO GIVES HER ALL ...to her friends and family ...to her online food blog ...to the man she loves Vivienne will try anything and everything to coax Matt out of his self-imposed exile. But for this to work, Matt is going to have to meet her halfway... Amazon / iBooks / B&N / Kobo / IndieBound