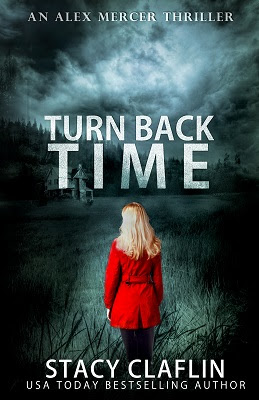 A dangerous cult disbanded years ago. Now they’re back, and they want revenge.

Alex Mercer spends his spare time operating a blog for missing children—a pastime inspired by his daughter’s recent disappearance. Another relative goes missing. As he follows up on leads coming into his site, the police department is inundated with a rash of missing persons cases. The incidents seem unrelated until evidence ties the cases to a dilapidated apartment building known for its unsavory clientele. Suspicion falls on a disbanded cult. The same cult Alex’s own relatives had managed to escape from and bring down a decade earlier.

The cult leaders, recently released or escaped from prison, reassemble their members and mandate a new mission to capture and kill all those responsible for the breakdown of their community. After another loved one disappears, Alex is ready to rescue the missing people from certain death. But will he get there in time?

Turn Back Time is the second book in a series of exciting standalone novels spun off from the USA Today bestselling Gone Trilogy. If you like heart-pounding suspense, page-turning action, and characters you’ll never forget, then you’ll love Stacy Claflin’s engrossing series.

Turn Back Time brings back some of my favorite Stacy Claflin characters.     Alex, Zoey, Macy, and Luke.    They are no longer teenagers and have lived a heck of a life.    Macy was kidnapped and taken to a cult when she was a teenager.  Luke and Zoey’s daughter was kidnapped also.    Now Luke’s mother has been kidnapped.    It seems this family just can’t get away from the cult.

What I continue to take away from this series is the strength of family.    The character’s families never lose hope, never give up, and never quit hoping for happiness.    They all manage to find happiness with many HUGE bumps in the path.      They also never waver in their support of each other.   In this book Luke’s mother is kidnapped and the rest of the characters and their families never doubt that she will be home safe and work together to find her.

Thank you Stacy Claflin for a copy of the book in exchange for an honest review.