The Measure of the Moon by Lisa Preston 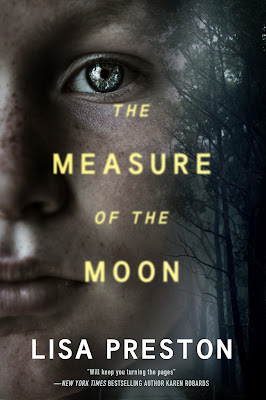 “If you ever say anything to anyone, they all die.”

When eight-year-old Greer Donner falls off his horse in the Washington wilderness, he braces himself to face the long hike home alone. But screams pierce the darkness, and he stumbles upon a dead-end road where a man is beating a woman—nearly to death. In a moment of courage, he stops the assault, but he’s left to face the man, who turns his wrath into an ominous threat: if the boy ever reveals what he has seen, his family will pay the ultimate price. The secret Greer now carries begins his emotional unraveling.

In Seattle, Gillian Trett is a photographer with a troubled marriage and a childhood she’s trying to forget. Domestic tension mounts when her husband’s stepsister arrives. Desperate for a distraction, and a way to advance her career, Gillian throws herself into uncovering the history behind an old man’s Holocaust photo of boys in a forest. The mysterious children and the truth behind the scene haunt her—she can’t let go of the image, or of her own shadowed past.

Then a horrifying revelation entangles Gillian’s path with young Greer’s. The boy and the woman, separated by a generation and a hundred miles, each confront the terrible power of harbored secrets—not only to eclipse the truth but also to illuminate the dark, unknown dimensions of their loved ones and themselves.

This is a mystery book… a mystery to the characters in the book that is.

The Donner family is trying to figure out what has caused Greer to change his attitude, his actions, and his life.    The reader is privy to the knowledge of what happen to Greer.     I loved that the Donner family didn’t just think Greer was acting out.   They knew their child/sibling well enough to know that something had happen to make him act the way he is.     They also went about trying to get him help without pushing him to say or do something that would cause him more trouble.   The support, the love, and the acceptance within the Donner family is true to how every family should be.

What happen to Greer was horrible.   The fact that a young boy would witness what he did and then kept it all a secret just to keep his family safe made him stronger than most boys would be and proved the love he had for his entire family.       It also proved that a man’s words to a young boy can cause a lot of angst and heartbreak.

I struggled trying to figure out how Gillian Trett’s part of the story would tie into Greer’s part of the story.    Gillian was not a likeable character from the beginning.      From the beginning of her story she was standoffish, rude, and just not warm and welcoming.   She partially redeemed herself as the story went on.
The Measure of the Moon is interesting with its dual storylines.

Born in Phoenix, Lisa lived in numerous Arizona towns as a child and later spent several years in California. By young adulthood, she was in Alaska and started mountain climbing. She climbed in South America on different expeditions, seeking summits in Ecuador, Chile and Argentina. She also travelled solo through Europe and Asia.