The Barefoot Summer by Carolyn Brown 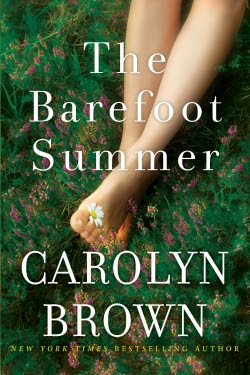 New York Times bestselling author Carolyn Brown returns with a heartbreakingly hilarious novel about three women who had nothing in common, except their husband.
Leaving one widow behind is unfortunate. Leaving three widows behind is just plain despicable. Oil heiress Kate Steele knew her not-so-dearly departed husband was a con man, but she’s shocked that Conrad racked up two more wives without divorcing her first. The only remnant of their miserable marriage she plans to keep is their lakeside cabin in Bootleg, Texas. Unfortunately, she’s not the only woman with that idea.
Fiery, strong-willed Jamie wishes Conrad were still alive—so she could kill the scoundrel herself. But for their daughter’s sake, she needs that property. As does Amanda—twenty-eight, pregnant, and still weeping over the loss of her true love. On a broiling July day, all three arrive in Bootleg…with a dogged detective right behind who’s convinced that at least one of them conspired to commit murder. One momentous summer filled with revelations, quirky neighbors, and barefoot evenings on the porch offers three women the chance to make the journey from enemies to friends, and claim a bright, new beginning.

My Thoughts…
One husband, three wives, and you know there is going to be drama.    I never imagined that these three women could find common ground and come to accept what Conrad did to them.     Each wife was unique.
‘
Kate came from old money and was the “first wife”.   She had strength and self-assurance that the other wives seemed to not have.   She also was the only one that knew what a snake Conrad was.      I liked her for being just another victim.  She didn’t hold it over anyone’s head that she had money or that she was the first wife.   She accepted that Conrad played them all for fools.    I felt like she became the mother figure for the other women guiding them in moving past Conrad and finding their own strengths and happiness.

Jamie was the only wife that has a daughter by Conrad and wished that he was alive for Gracie.     Yet, she proved her strength by staying strong for Gracie and going for what she believed was theirs.    While I was sad that Gracie lost her father, it was soon shown that he wasn’t such a great father anyways.      What went straight to my heart about Jamie and Gracie is how Gracie felt about her father’s death.    I think we sometimes think the little ones don’t understand or will just bounce back and forget that they don’t always understand the reasoning behind something happening to someone they loved.

The last wife and the newest is Amanda.   She is young and pregnant and so in love with Conrad.   She is determined to keep his legacy alive for their unborn child.     Slowly she realizes what a con man Conrad was and figures out how to accept that.     Amanda is the baby of the group.       She is the last one to understand exactly what Conrad was.

Each women has the chance to start over, accept a new life, and make new friends in their journey to Bootleg.

I really enjoyed reading The Barefoot Summer by Carolyn Brown and am excited to share my thoughts on this great book.   I recommend picking up your own copy.
Book Links
Goodreads   |   Amazon   |   Barnes and Noble

About the Author: Carolyn Brown

Carolyn Brown is a New York Times and USA Today bestselling author, as well as a RITA finalist. She has written several beloved and popular romance titles, ranging from historical to contemporary to cowboy-themed. She and her husband live in Davis, Oklahoma. They have three grown children, and enough grandchildren to keep them young.