Staying For Good (Most Likely To #2) by Catherine Bybee 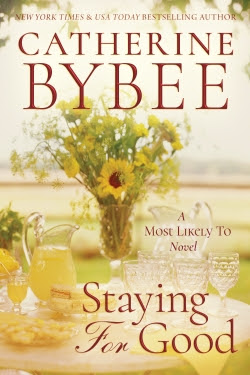 Zoe Brown may have been voted Most Likely to Never Leave River Bend, but the paper-thin walls and suffocating air of her family’s double-wide trailer were not what she wanted for her life. Other than BFFs Melanie and Jo, the only thing that kept Zoe sane during high school was her boyfriend, Luke.

She didn’t just leave, she escaped—turning her back on the shame of her black-sheep siblings and imprisoned dad. Now a celebrity chef in Dallas, she can afford all the things she never could have growing up. But when she returns to rustic, ruggedly beautiful River Bend, Zoe has to face all that she abandoned—including Luke.

While Luke was a refuge for Zoe in the past, he knows they inhabit totally different worlds now. Anchored by his parents and his job as a mechanic in his father’s shop, Luke never felt the urge to leave River Bend—until Zoe’s return.

But when the two rekindle their old flame, Zoe is forced to make the hardest decision of her life: remain in River Bend and confront her past before it destroys her, or say good-bye to everyone she’s ever loved…again, this time for good.

A small hobunk town where everyone knows everyone’s business and your business isn’t all good, of course you want to escape and leave it all behind.   That is exactly what Zoe wanted/needed to do.   She had to escape, she had to put it all behind, even if that means the love of her life.

I love Zoe.    She has spunk, respect, and love.   She takes what could be a dead end life with an abusive dad who is in jail and a mom who can’t get over him and escapes into a life of excitement, fulfillment, and loving what she does.     The only hold up is that she can’t find love.     I love when someone is so in love with someone that they can’t move past.    They try, they have short meaningless relationships trying to find that happen ending they want, yet they can’t do it.     They can’t give themselves to anyone other than the man who is meant to be theirs.

Catherine Bybee did it again with Staying for Good.     She wrote a book I could not put down with characters that I could not help caring about.      I was invested in the story, the characters, and the outcome.      I certainly recommend picking up your own copy.
Book Links
Goodreads   |   Barnes and Noble   |   Amazon

New York Times bestselling author Catherine Bybee was raised in Washington State, butafter graduating from high school, she moved to Southern California with the hope of becoming a movie star. After growing bored with waiting tables, she returned to school and became a registered nurse, spending most of her career in urban emergency rooms. Now, she writes full-time. She has penned the popular Weekday Brides series as well as the beloved Not Quite series. She resides in Southern California with her two sons.