REVIEW of Who She Is by Diane Byington 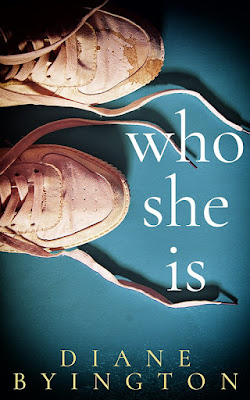 In the fall of 1967, Faye Smith’s family moves to Florida to work in the orange groves, and she has to start a new school… again. She tries out for the track team, knowing her mother would never approve because of Faye’s epilepsy.

When Faye discovers she has a talent for distance running, she and her friend Francie decide to enter the Boston Marathon, even though women aren’t allowed to compete. Desperate to climb out of the rut of poverty, Faye is determined to take part and win a college scholarship.

After the school bully tries to run her down with his car, a strange memory surfaces—a scene Faye doesn’t recognize. Her parents insist that it’s a symptom of her epilepsy, but Faye thinks they might be lying, especially when it keeps happening. To get her life on the right path, she’ll need to figure out what her parents are hiding and never lose sight of the finish line.

In reading the description I was thinking I was reading a book about women’s rights.   While that could be a great story I felt this was more a story of a young girl, a teenager girl, finding out what her life really is.      Faye has lived a rough life with her vagabond parents.   They work odd jobs, can’t stay in one place, and are not very loving to their daughter.   I put their attitude towards their daughter being brought on by their rough lives, but as the story goes on I knew there was more to it.

There are two storylines surrounding Faye.   The story of Faye trying to break into the running world as a woman is the first part.   She wants to run on the school track team and run the Boston Marathon both of which are male only.   I loved seeing her work hard and reach goals that have been out of the reach of most women.     The second storyline is who Faye really is.   There are so many clues as to who she is, who she could be, and who she wants to be.      This storyline was interesting to read but it was also easy to put the clues together.    I had it figured out before the author reveals it to the readers.

I found myself really enjoying reading about a strong, young woman who is still a teenager and she is also able to defend herself, do what is right for herself, and find herself.      This is a great book for anyone who loves women in sports and loves a female who isn’t afraid to push boundaries.

Diane Byington has been a tenured college professor, yoga teacher, psychotherapist, and executive coach. Also, she raised goats for fiber and once took a job cooking hot dogs for a NASCAR event. She still enjoys spinning and weaving, but she hasn’t eaten a hot dog or watched a car race since.


Besides reading and writing, Diane loves to hike, kayak, and photograph sunsets. She and her husband divide their time between Boulder, Colorado, and the small Central Florida town they discovered while doing research for her novel.
Posted by A Soccer Mom's Book Blog at 3:00 AM