REVIEW of Other People's Houses by Abbi Waxman

Named A Highly Anticipated Book for 2018 by InStyle.com, Elite Daily, and Hello Giggles!

The author of The Garden of Small Beginnings returns with a hilarious and poignant new novel about four families, their neighborhood carpool, and the affair that changes everything. 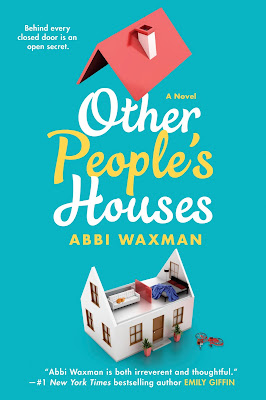 At any given moment in other people's houses, you can find...repressed hopes and dreams...moments of unexpected joy...someone making love on the floor to a man who is most definitely not her husband...

As the longtime local carpool mom, Frances Bloom is sometimes an unwilling witness to her neighbors' private lives. She knows her cousin is hiding her desire for another baby from her spouse, Bill Horton's wife is mysteriously missing, and now this...

After the shock of seeing Anne Porter in all her extramarital glory, Frances vows to stay in her own lane. But that's a notion easier said than done when Anne's husband throws her out a couple of days later. The repercussions of the affair reverberate through the four carpool families--and Frances finds herself navigating a moral minefield that could make or break a marriage.

Other People’s Houses is such a realistic story.   Maybe not all the storylines would be happening at the same time, but it is the idea that closed doors every family has their own world happening.    As the neighbors look on, there are things that should be kept private yet in a neighborhood where everyone knows everyone it is close to impossible.     Many times the happenings behind closed doors become more drama than they have to be just because of other’s opinions, “help”, or just plain nosiness.

Frances was the know all in her neighborhood.   Probably due to the fact that she was the stay at home mom that everyone turned to when they needed help.    She was given an inside look, through the kids especially, behind the walls of her neighbors.     She tried to help everyone,  she had her nose in everyone’s household, but she was not the gossip.   She knew what was happening, she was willing to help, and she didn’t spread their gossip around.

The other characters all tell their story but Frances is the main narrator.   I liked being able to hear firsthand what has happening in their lives and getting an inside look at their lives.     Some of the problems were heavy, some were not so heavy, but all were realistic to the real lives in US.   I laughed, I blushed, and I felt compassion for most of the characters.    I am recommending this book to anyone who enjoys getting an inside look at the lives of others.

Thank you Ryanne Probst at Berkley Publishing for a copy of the group in exchange for an honest review.

Add to your MUST-READ list on Goodreads
Purchase your copy at AMAZON, Barnes and Noble, Kobo, or BookBub

Frances pulled into the elementary school lot and Ava got out, sighing as if she were a fourteen-year-old Victorian child disembarking for her day down the mine. She pulled open the door and swung her arm wide.

“Medium-size children may now escape. Mind the gap, and watch out for speeding moms on cell phones.”

The children had already unbuckled and piled out, high-fiving Ava as they passed her. Kate stopped, and Frances turned to see what was up. The little girl’s face was a study in conflict.

Kate looked at Frances, and her chin wobbled.

“I left my toilet roll tubes at home.”

“Oh.” Frances looked at her eldest child. Ava shrugged, looking back inside the open minivan.
“They aren’t in the car.”

“Oh, OK.” Frances smiled at Kate. “I’m sure the teacher will have lots of extras.” She herself had, over time, sent in three thousand toilet roll tubes. For all she knew they were building a particle collider out of them, or an accurate re-creation of the New York subway system. Let’s hope they didn’t use the obvious choice for subway trains.

“No, I have to have my own ones.” Kate’s eyes were filling with tears, her shit-fit indicator was dropping to DEFCON 3. “It’s for the class project. Everyone else will have them.”

Frances weighed her options. On the one hand Kate was only six, and would not only survive but would forget the trauma of not having had toilet roll tubes. But on the other hand, she was a member of the Yakuza-esque organization known as Miss Lollio’s First Grade Class, whose members fell on the weakest like wolves on a lamb. Forgetting to bring toilet roll tubes and having to borrow some was a Noticeable Event to be avoided at all costs. It wasn’t on the level of peeing oneself, of course, it wasn’t going to give rise to a nickname you couldn’t shake until college, but it wasn’t great.

“My mommy put them in a bag, but she forgot to give them to me.” A note of accusatory steel had entered her voice. Frances gazed at the little angel, whose mother had been heard calling her Butterblossom. Kate’s eyes had gone flat like a shark’s. She knew she would get what she wanted, the only question was when. I am younger than you, old lady, her eyes said, and I will stand here until age makes you infirm, at which time I will push you down, crunch over your brittle bones, and get the toilet roll tubes I need.

“Alright, Kate. I’ll go back and get them after I drop Ava, OK, and bring them back to school for you.” Frances knew she was being played, but it was OK. She was softhearted, and she could live with that.

“Suckah . . .” Ava headed back to her seat, shaking her head over her mother’s weakness, a weakness she loved to take advantage of herself.

“Thanks, Frances!” Kate beamed an enormous smile, turned, and ran off—the transformation from tremulous waif to bouncy cherub instantaneous. Behind her in the line of cars, someone tapped their horn. OK, the brief honk said, we waited while you dealt with whatever mini crisis was caused by your piss-poor parenting, because we’re nice like that, but now you can get a move on because we, like everyone else in this line, have Shit to Do. Amazing how much a second of blaring horn can communicate.

She dropped the other kids and was back at Anne’s house in a half hour. Having carpool duty wasn’t the onerous task the other parents thought it was: All three schools were close to home, and all four families lived on the same block. As Frances ran up to Anne’s door she looked over and saw her own cat, Carlton, watching her. She waved. He blinked and looked away, embarrassed for both of them.
She knocked softly on the door, but no one answered. Maybe Anne had gone back to sleep. She turned the handle and pushed open the door, peering around. Yup, there was the bag of toilet roll tubes. She grabbed it and was about to shut the door again when she saw Anne lying on the floor, her face turned away, her long hair spilling across the rug.

“Anne! Holy crap, are you OK?” But as she said it her brain started processing what she was really seeing. Anne, on the floor, check. But now she’d turned her head and Frances realized she was fine. In fact, she was better than fine. Frances had instinctively stepped over the sill and now she saw that Anne was naked, her face flushed, a man between her legs, his head below her waist.

“Shit . . .” Frances dropped her eyes, began to back out, “Sorry, Anne, Kate forgot her toilet roll tubes . . .” Stupidly she raised her hand with the Whole Foods bag in it because, of course, that would make it better, that she’d interrupted Anne and Charlie having a quickie on the living room floor. It was OK, because she was just here for the toilet roll tubes. Nothing to see here, move along.

The man realized something was wrong, finally, and raised his head, looking first at Anne and then turning to see what she was looking at, why her face was so pale when seconds before it had been so warmly flushed.

Frances was nearly through the door, it was closing fast, but not before she saw that it wasn’t Charlie at all. It was someone else entirely.

Frances closed the door and heard it click shut.