The Long Night: A Novel of Suspense by Jessica Scott 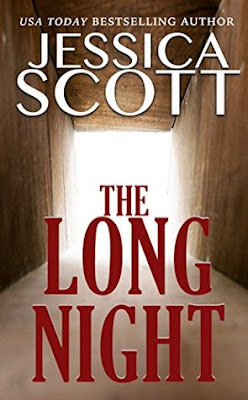 "This one will haunt you." J.D. Rhoades

Whatever it takes, just come home to me. Promise me, Sam.

In eight months, Staff Sergeant Sam Brown will become a father. But first, he has to survive his fourth tour in Iraq. On his last night home, he tries to pretend that everything is fine, that the war is fine, that his life is fine.

But as he returns to the war zone, things are anything but fine and the promise he made to his fiancé takes on a desperate edge. As things spiral down, Sam starts to wonder about that promise.

How high is the price he will pay when the long night comes to an end?

The Long Night is a story of a soldier, Staff Sergeant Sam Brown, as he gets ready to deploy for the fourth time leaving behind a fiancée who is pregnant.     The feelings they both felt with his leave coming to an end pulled at my heart.    There was a promise made, although he tried not to make, that haunted him while he was deployed.     This one promise, the promise to come back to his fiancée, is what Sam’s nightmares came from.    Deployments without the nightmares are tough; add the nightmares and I cannot even imagine the hell Sam felt.    Although, the words and story that Jessica Scott use in The Long Night definitely let the reader get a feel for how Sam was feeling.

There are so many sub-stories within the bigger story of Sam wanting to go home.    There is the story of missions going wrong, friendships made during rough times, losing fellow soldiers, fighting your own demons, and the love of a soldier and those he leaves home.    These smaller stories are just as important as the main story.    The details make the story one you will not forget.    When I finished reading I set the book down and just thought about it.

The Long Night is not a story for everyone but if you are looking for a real story this is the book for you.   I recommend checking it out.

Jessica Scott is an Iraq war veteran, an active duty army officer and the USA Today bestselling author of novels set in the heart of America’s Army. She is the mother of two daughters, three cats and three dogs, and wife to a retired NCO. She and her family are currently wherever the army has sent her.