His to Love by Stacey Lynn 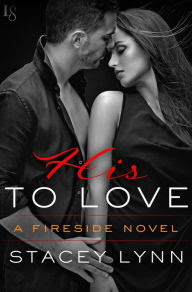 Tyson Blackwell never saw it coming when his Mafia princess girlfriend dumped him and disappeared at the age of eighteen. He never forgot her, either, even after what happened next: the killing of his father, a Detroit PD officer, at the hands of one ofher father’s men. Tyson swore revenge, and now, ten years later, the kid who dreamed of a pro football career is a hard-nosed FBI agent, back in town to take down the Galecki crime family once and for all. But Tyson’s mission gets complicated fast—because going undercover means seducing the only woman he’s ever loved.

Gabriella “Blue” Galecki has been in hiding for a decade. She finally comes home to spend time with her terminally ill mother, only to receive a blast from the past when she runs into Tyson. His brooding eyes and electrifying touch still send chills down her spine. But as heir to the family empire, Blue has been promised to another. Caught in a web of deception, she is tempted to pull the trigger on the boldest risk she’s ever taken: trusting Tyson with her life, her body, and her heart.
My Thoughts…

I am a true believer that everyone deserves a second chance.     Tyson and Blue definitely deserve it.    They were apart due to a father taking control of a situation that he had no business doing.      From the very beginning I could see how much Blue’s father wanted to control her.    He didn’t want Tyson and Blue together and did what he needed to to keep them apart.     The second chance starts on the plane ride back to Detroit for both of them and the story just gets better and better.

The reconnection between Tyson and Blue was the story… the love story… but there was more to Stacey Lynn’s book.    There were family expectations, standing up for what is right, and making choices for yourself instead of doing what was expected.   Blue is strong.    Strong enough to know her mind, to love her family, to love Tyson, and to not just fall into the line expected of her by both Tyson and her father.     I love how she pushed the men in her life to let her live her life as she wanted to yet she didn’t push them away for trying to protect her.    Even her father, with his misguided intentions, wants to keep her safe while keeping his business intact.

The best part is that nothing in this book was easy.   Love, family, growing up, or finding themselves were all struggles.    Each character grew as they worked their way through life.      I cannot wait for more of the Fireside Series.   I recommend picking up His to Love.