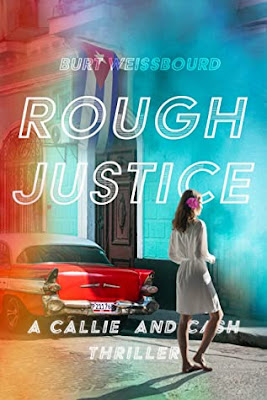 Taken from Goodreads:  Callie and Cash are back!

“When you get out of jail, don’t ever come back here.”

Callie James thought those were the last words she’d ever speak to Cash Logan. Two years later, in Danger in Plain Sight, Callie and Cash become an improbable team taking on lethal adversaries.

Now, in Rough Justice, Callie and Cash are back, and their world is about to explode.

It’s been a year since they saved her ex-husband’s life and faced unexpected, terrifying adversaries. During that process—confronting kidnapping, murder and the destruction of her restaurant—they came together, and against all odds, fell passionately in love.

The smooth sailing abruptly ends when Sara, a twenty-five-year-old, half-Algerian woman, unexpectedly shows up at the restaurant and insists on telling them her shocking, unbelievable story. Someone has stolen her identity, and they’re trying to kill her. Sara needs their help now, and she has a stunning, life-changing secret to tell.

Again, Cash and Callie assemble their unconventional ragtag family—including peg-legged Andre, and Itzac, “the Macher.” Together, they go to war with formidable adversaries to save Sara and ultimately their own lives. The fierce global battle leads them to Cuba, where they launch an audacious offensive that shocks even them…and will absolutely take your breath away.

With Rough Justice, Burt Weissbourd elevates not only his deeply rich and complex characters, but the entire thriller genre.

My Thoughts:  I am starting out stating that this is the first book by Burt Weissbourd that I have read and I am excited to find more of his books.  I enjoyed the quirky characters and their fun relationships.   I fell right into the story and did not want to come back out.

Cash and Callie are a fun couple.   They have a relationship and life together but that life is crazy.   Sara comes and shakes up their life with her story of a stolen identity and almost being killed.  Cash and Callie step right up to protect and figure out who is after her.   I loved their belief in her, they did not doubt what she said, and worked so well together to keep her out of harms way.    Callie accepted Sara into their life and found ways to include her making her feel wanted and loved for the first time in a long time, if not ever.

Rough Justice was an easy book to read and enjoy.  I recommend picking up your own copy.   I will be waiting for more books in this series to be available and going back and reading the first book, since I did not do that already.

Thank you GetRedPR for a copy of the book in exchange for an honest review. 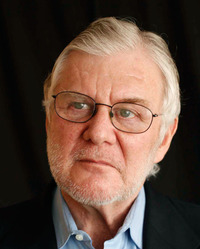 Meet Burt Weissbourd  (taken from Goodreads):  Burt Weissbourd is a novelist, screenwriter, and producer of feature films. He was born in 1949 and graduated cum laude from Yale University, with honors in psychology.
During his student years, he volunteered at the Museum of Modern Art in Paris and taught English to college students in Thailand. After he graduated, he wrote, directed, and produced educational films for Gilbert Altschul Productions. He began a finance program at the Northwestern University Graduate School of Business but left in his final semester to start his own film production company in Los Angeles. He managed that company from 1977 until 1986, producing films including Ghost Story starring Fred Astaire, Melvyn Douglas, John Houseman, and Douglas Fairbanks Jr, and Raggedy Man starring Sissy Spacek and Sam Shepard, which The New York Times called "movie of sweet, low-keyed charm." In 1987, he founded an investment business, which he still runs. Burt’s novels include the thrillers Danger in Plain Sight, The Corey Logan
Trilogy (Inside Passage, Teaser and Minos), and In Velvet, which is set in Yellowstone National Park. Rough Justice, the sequel to Danger in Plain Sight, is his latest novel.
Posted by A Soccer Mom's Book Blog at 12:00 PM