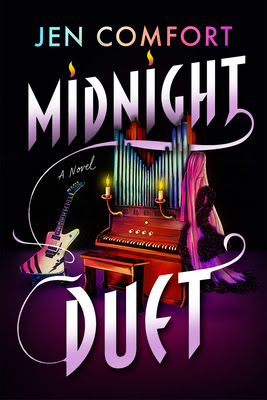 Taken from Goodreads:  From The Astronaut and the Star author Jen Comfort comes a wildly electric romance about two musicians who collide on the stage of a Nevada opera house.

Self-professed diva Erika Greene has it all: a starring role on Broadway, legions of fans, spectacular natural talent. But after an accident on stage leaves her face scarred and her career in shambles, Erika retreats to Paris, Nevada, where she’s inherited a ramshackle opera house in desperate need of some TLC.

Erika pours her savings into the building, but it’s not enough to stave off casino developer Raoul Decomte’s avaricious gaze. With foreclosure imminent, she leases the space to some unexpected tenants: a German hair metal band, fronted by glam rock god Christof Daae.

Erika is tempted by Christof’s low-slung leather pants—and even more so by his ambitious drive to make Nacht Musik international superstars—but he’s off-limits. The rest of his band thinks he’s still dating their beloved keyboardist, who is conveniently not present on this jaunt to the American Southwest. When Erika finds out Christof’s been unceremoniously dumped and is trying to keep it under wraps, she makes a deal to keep his secret…for a price, of course.

Christof is desperate to hold the rest of the band together after his keyboardist’s departure, but he can’t maintain the charade forever. Nor can he resist the opera house’s mysterious proprietor, who tempts him with midnight singing lessons. It isn’t long before sensuous nighttime interludes turn into smoldering backstage encounters.

But can their newly ignited passion survive the searing light of day? Or will their beautiful duet turn into a brokenhearted power ballad for one?

My Thoughts:  I picked up this book because it was supposed to be a twist of Phantom of the Opera, one of my favorite musical.    It does have mentions and similarities with the musical but I really enjoyed the story due to the characters.

The band members were all so quirky.  They had their diva moments and made me laugh a little, but even more they were a family.   They fought, they bickered, they respected each other, and they loved each other.   Erika and Christof had many hot and steamy moments, some of it a little too much for me, but it was easy to skim those sentences and keep reading.  The brother/sister relationship rang so true for me.   They could fight fiercely but they also loved each other fiercely.

The story of the opera house was interesting and I was waiting for the twist that would save the day or end the day, I was not sure which way the story would go.   The way it went was perfect.   The final twist was the perfect Phantom moment.

**Thank you Montlake for a copy of the book via NetGalley in exchange for my honest review. 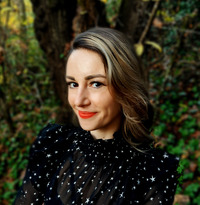 Meet Jen Comfort: Jen discovered romance novels as a Very Cool (TM) teenager, when she volunteered at the local library after school (as Very Cool teens often do). At the time, the specific appeal was that they had way more sex in them than the Nancy Drew books she'd been reading... but she also loved the feminism, optimism, and unrelenting pursuit of happy ever after—even in the darkest times.

Determined to become a romance writer, Jen made the obvious decision to major in astrophysics. When that didn't work out (did you know they require you to do homework?), she got a degree in hospitality instead, then spent a decade managing restaurants in NYC and Portland before finally settling down to write.

She now lives in Portland, Oregon with her cat, a sassy husky-malamute, and a rotating collection of short-lived plants.

Jen is represented by the most excellent Eva Scalzo at Speilburg Literary agency.