Book Review for The Wrong Bones by Melinda Leigh

The Wrong Bones by Melinda Leigh 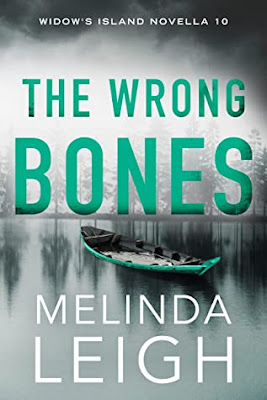 Taken from Goodreads:  A frantic chase to catch a grave robber reveals a startling discovery in this tenth installment of the Widow’s Island novella series by Wall Street Journal bestselling author Melinda Leigh.

Deputy Tessa Black spots a man disturbing a grave in the local cemetery and gives chase. But when Tessa catches him, she learns that the ghoulish trespasser wasn’t robbing graves; he was burying a box of bones.

With the help of her fiancé, park ranger Logan Wilde, Tessa discovers that the remains belong to a missing teenager from a nearby island. After the girl disappeared nine months ago, police labeled her a runaway. Now, though, it’s clear the teenager was murdered.

When the only witness is an uncooperative teenager, Tessa and Logan must find the killer before the boy becomes the next target.

My Thoughts:   I have read many of The Widow’s Island series but not all of them.   When I saw a novella was available, I knew that I needed to read it.   I really like that I do not have to read all the books to enjoy other books.  Each book is a stand-alone with the same setting and familiar characters, but each book has it’s own story and a finished ending.

In The Wrong Bones, Tessa and Logan are solving a local crime that starts in the cemetery.  There were many clues and not a lot of surprises until the end.   I thought I had it figured out, but I did not quite have it all put together.

Melinda Leigh did a great job writing a fun novella.   She told the whole story in just over 100 pages and I love it.