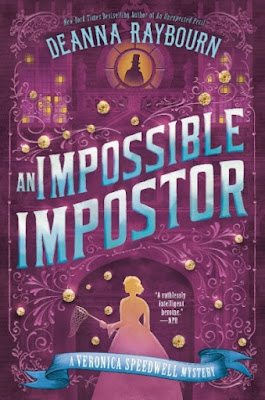 From Goodreads:  While investigating a man claiming to be the long-lost heir to a noble family, Veronica Speedwell gets the surprise of her life in this new adventure from the New York Times bestselling and Edgar Award-nominated author Deanna Raybourn.

London, 1889. Veronica Speedwell and her natural historian beau Stoker are summoned by Sir Hugo Montgomerie, head of Special Branch. He has a personal request on behalf of his goddaughter, Euphemia Hathaway. After years of traveling the world, her eldest brother, Jonathan, heir to Hathaway Hall, was believed to have been killed in the catastrophic eruption of Krakatoa a few years before.

But now a man matching Jonathan's description and carrying his possessions has arrived at Hathaway Hall with no memory of his identity or where he has been. Could this man truly be Jonathan, back from the dead? Or is he a devious impostor, determined to gain ownership over the family's most valuable possessions--a legendary parure of priceless Rajasthani jewels? It's a delicate situation, and Veronica is Sir Hugo's only hope.

Veronica and Stoker agree to go to Hathaway Hall to covertly investigate the mysterious amnesiac. Veronica is soon shocked to find herself face-to-face with a ghost from her past. To help Sir Hugo discover the truth, she must open doors to her own history that she long believed to be shut for good.

My Thoughts:  An Impossible Imposter is book 7 in the Veronica Speedwell series. I think the books can be read without reading the others in the series but there is some backstory and history of the characters that would be found in them.

This series is a MUST-READ series for me.  Deanna Raybourn is an author that does not just write a story, she takes her reader on an adventure.  She takes them to a time and place that is real but in an earlier era. The characters that she writes about are real and interesting. Every time I pick up a book I know that I will find a book that I cannot put down.

In An Impossible Imposter we learn more about Veronica’s past. I have always been intrigued on what has happen in Veronica’s past to make her the woman she is today, and this book gives me another glimpse at her life. I loved seeing her come face to face with her past and how she was going to continue her life after.

I recommend reading this entire series. 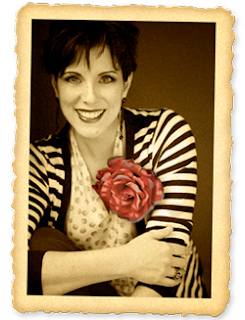 Meet Deanna:  (Taken from Goodreads) New York Times and USA Today bestselling novelist Deanna Raybourn is a 6th-generation native Texan. She graduated with a double major in English and history from the University of Texas at San Antonio. Married to her college sweetheart and the mother of one, Raybourn makes her home in Virginia. Her novels have been nominated for numerous awards including two RT Reviewers’ Choice awards, the Agatha, two Dilys Winns, a Last Laugh, three du Mauriers, and most recently the 2019 Edgar Award for Best Novel. She launched a new Victorian mystery series with the 2015 release of A CURIOUS BEGINNING, featuring intrepid butterfly-hunter and amateur sleuth, Veronica Speedwell. Veronica returned in 2017's A Perilous Undertaking, and A Treacherous Curse, 2018. A Dangerous Collaboration was released in 2019, and book five, A Murderous Relation, was a March 2020 release. An Unexpected Peril, Veronica's sixth adventure, published in March 2021. In addition to further Veronica books, Deanna is writing a contemporary novel about four female assassins on the cusp of retirement.
Posted by A Soccer Mom's Book Blog at 6:00 AM