A former Coast Guard officer’s debut novel exploring the moral question of who has a right to a better life. “Thomas Bardenwerper will keep you engaged to the very last page with this well-crafted and often thrilling exploration of moral quandaries that challenge us all.” ― E. J. Dionne Jr., author of Code Red

On a moonless night, two vessels converge in the Mona Passage, a stretch of ocean separating Hispaniola and Puerto Rico. One is a U.S. Coast Guard cutter, the other a primitive motorboat overloaded with Cuban migrants. In that moment, a young Coast Guard officer must make a decision that could save the life of a woman he knows while possibly ruining his forever.

Mona Passage (Syracuse University Press; ISBN 978- 0815611394; on sale November 15, 2021; $29.95) is the story of two neighbors in San Juan, Puerto Rico: Pat McAllister, a Coast Guard officer whose cutter patrols the Caribbean Sea for drug traffickers and migrants, and Galán Betances, an entrepreneur who escaped Cuba by raft as a child, leaving his mother and his special-needs sister behind.

Pat and Galán bond during evenings spent atop their Calle Luna rooftop, as they share beers and trade stories from their distinct worlds. In time, Galán becomes like an older brother to Pat, whose actual beloved brother, Danny, is suffering back home from the emotional scars incurred as a soldier in Iraq.

When Galán returns to Cuba for his mother’s funeral – his first time back on the island since his traumatic departure decades before – he learns that his sister, who is now alone, will be committed to a poorly run mental health facility. With no way to bring her legally to the U.S., Galán considers whether Gabriela could make the risky journey to Puerto Rico via the Dominican Republic and Mona Passage. Pat, whose Coast Guard cutter routinely interdicts these boats loaded with migrants in search of a better life, warns Galán that such a journey will be treacherous—perhaps fatal. Aware of the dangers but determined for Gabriela to live a full life, Galán hands over all of the money he has to a Dominican smuggler based out of a San Juan nightclub, and Gabriela begins her terrifying journey.

Knowing that his cutter may be all that separates Galán and Gabriela—and haunted by the human suffering he has witnessed at sea—Pat must decide. Will he remain true to his oath, as his older brother had done in Iraq? Or will he risk his own future—and perhaps his freedom—for his closest friend?

“A suspenseful, humane novel, moving in its portrait of families divided by the hostilities of their governments, in this case Cuba and the United States.” ― Tobias Wolff

“What would you risk for a sister, a brother, a friend, a stranger? Mona Passage is one of those rare novels that will expand your heart.” ― Janet Benton, author of Lilli de Jong

“An engrossing five-star read from a talented new author—not to be missed!” ― Jim Howe, author of Red Crew 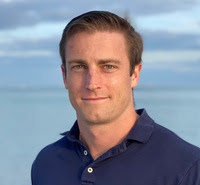 About the Author: Thomas “Buddy” Bardenwerper served for five years as a Coast Guard officer aboard cutters homeported in Maine and Puerto Rico, participating in humanitarian and law enforcement missions from Canada to Colombia. He spent two years living in San Juan and has twice traveled across Cuba. Bardenwerper brings fresh perspective in this debut novel for readers who are interested in underrepresented voices in American fiction.

Bardenwerper’s career in the Coast Guard came to an unexpected end when he was medically retired in 2018 for Type 1 diabetes. Thanks to the GI Bill and Yellow Ribbon Program, Buddy will be earning a joint degree from Harvard Law School and the Harvard John F. Kennedy School of Government in 2022. Mona Passage is Bardenwerper’s first book.