The Fastest Way To Fall by Denise Williams 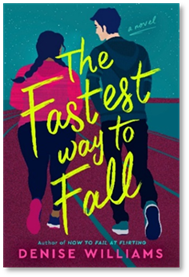 From  Goodreads: Britta didn’t plan on falling for her personal trainer, and Wes didn’t plan on Britta. Plans change and it’s unclear if love, career, or both will meet them at the finish line.

Britta Colby works for a lifestyle website, and when tasked to write about her experience with a hot new body-positive fitness app that includes personal coaching, she knows it’s a major opportunity to prove she should write for the site full-time.

As CEO of the FitMe app, Wes Lawson finally has the financial security he grew up without, but despite his success, his floundering love life and complicated family situation leaves him feeling isolated and unfulfilled. He decides to get back to what he loves—coaching. Britta’s his first new client and they click immediately.

As weeks pass, she’s surprised at how much she enjoys experimenting with her exercise routine. He’s surprised at how much he looks forward to talking to her every day. They convince themselves their attraction is harmless, but when they start working out in person, Wes and Britta find it increasingly challenging to deny their chemistry and maintain a professional distance.

Wes isn’t supposed to be training clients, much less meeting with them, and Britta’s credibility will be sunk if the lifestyle site finds out she’s practically dating the fitness coach she’s reviewing. Walking away from each other is the smartest thing to do, but running side by side feels like the start of something big. 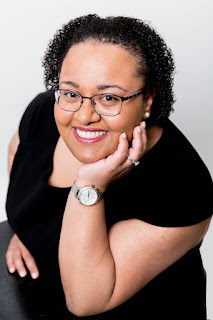 Meet Denise:  (from Denise’s Website)Denise Williams wrote her first book in the 2nd grade. I Hate You and its sequel, I Still Hate You, featured a tough, funny heroine, a quirky hero, witty banter, and a dragon. Minus the dragons, these are still the books she likes to write. After penning those early works, she finished second grade and eventually earned a PhD. After growing up a military brat around the world and across the country, Denise now lives in Iowa with her husband, son, and two ornery shih-tzus who think they own the house. How to Fail at Flirting was her debut novel and she can usually be found reading, writing, or thinking about love stories.
1.     Tell us about THE FASTEST WAY TO FALL!

The Fastest Way to Fall is my love letter to feeling strong and meeting someone who makes you feel stronger. Britta is a journalist working for a lifestyle magazine called Best Life. Her opportunity to impress the editor and move up in the company comes when she’s charged with reviewing FitMi Fitness, a body-positive fitness app. Through the app she meets her virtual coach, Wes, who happens to also own the company, and sparks fly as they chat. Wes is a personal trainer turned CEO who is at a professional and personal crossroads and coaching, then becoming friends with Britta gives him the energy and joy he’s found lacking in his life. Their relationship grows, neither knowing the other’s identities as reporter and CEO, all while Britta’s posts about the app and her experience with her new workout journey are going viral. Wes knows he can’t fall for a client and Britta knows she can’t fall for a source, but as they begin running together, the feeling that their footsteps belong side by side is hard for either to ignore.

It’s not a story about weight loss or a fat woman changing to find love, but I do encourage readers to take care if talk about exercise, nutrition, or bodies is potentially triggering.

2.     How did your writing process for this book compare to your process for How to Fail at Flirting?

I started working on The Fastest Way to Fall before I knew How to Fail at Flirting would be published. In that way, working on them was somewhat similar—the writing was an escape. Beyond that similarity, though, I took more time mapping out what would happen in this book. I had learned more about story structure and character development and writing this book was much easier (and much faster!) than writing How to Fail at Flirting.

Shortly after finishing How to Fail at Flirting, I was part of a retreat for women and non-binary people of color and we were asked to do an activity where we reflected on a time we felt strong. I remember thinking about how I felt when I was at the gym and crushing it, even after avoiding the gym for so much of my life as a fat woman. As I was driving home and reflecting on the retreat, I came back to that idea of feeling strong and began to noodle on what a love story for someone in those moments of feeling strong. The Fastest Way to Fall was born.

My favorite part of writing the book was building the relationship between Britta and Wes. I smiled so much while writing their flirtatious text messages and imagining their affection for each other building to the breaking point. The ways they help each other to be strong in big and small ways emerged from the silly jokes, and soft touches and I am really proud of that.

My biggest challenge writing this book was finding the right balance for Britta. I wanted the character to be happy, confident, and someone who wouldn’t make readers feel bad about themselves, but also a fat woman navigating some real challenges in the world. In the end, I really love how Britta turned out—in some ways I aspire to be like her!

5.     What do you hope readers will take away from reading THE FASTEST WAY TO FALL?

I hope readers take away that happy, swoony feeling one gets after a satisfying conclusion to a love story, but I also hope readers walk away thinking about their own strength—those times when they feel like they can do anything, and maybe the people they want to stand next to in those moments. I hope people walk away from the book feeling strong and beautiful, because they are.