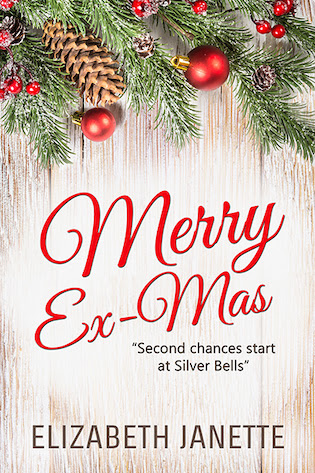 It’s been ten years since Delaney Silverman last stepped foot on the Silver Bells Christmas Tree farm her family owns and operates, but when her father dies, she has no choice. Even if it means mending fences with her estranged mother. The last thing this reformed wild-child-turned-Manhattan-marketing-pro has in mind, though, is a second chance at first love. But after life brings her face to face with the sexy, ex-fiancé neighbor boy, she realizes he’s everything she never knew she needed.

Travis Harper knows two things to be true: 1. It’s time to adopt his foster daughter and build a custom home life for themselves, and 2. Laney Silverman is the last woman he’d ever trust with their hearts, even if she is everything he’s ever wanted. Especially since she has a bad habit of walking away from him.

Will twelve days be enough to give two former lovers a Merry Ex-Mas?

Releasing her grip on the luggage, Laney wrapped her arms around her mom, pulling her into an awkward embrace.

“Hugging you. Apparently it’s what people do when they’ve lost someone they love.”

“Yeah, well, stop it. I don’t need your sympathy.”

Whatever emotion Travis thought he saw when looking at Laney’s mother, it wasn’t there now. When she drew back and studied Ruth’s face, no tears clouded her eyes. No grief etched her expression. Only annoyance, pure and simple. Like always. Laney dropped her arms. Same old Mama. Lovable as a freaking porcupine.

Deep breath, girl. You can do this. For Dad. She peered up at the house. Despite the generous square footage of the single-story bungalow-style house, from the outside, the home appeared smaller, darker without her father’s presence. She swallowed hard to dislodge the lump of grief wedged in her throat and forced herself to enter the house.

Crossing the threshold tugged at the threads of memories she’d kept squirreled away. Not all of them welcome. It took only one whiff of the familiar cinnamon coffee scent before the years magically melted away, and she was eighteen again, chafing at the bit, dying for just one ounce of the freedom her friends possessed.

Laney shook off the ghosts that held her hostage and tried to only focus on the positive memories. The ones with her dad.

As she made her way through the living and dining room toward her old bedroom, a smile pulled at her lips as fond memories bubbled up. She’d been closest to her father and everywhere her gaze landed brought forth an image of him to warm her heart. Fingers drifted over the couch, threadbare now but still located in the same place against the wall. Her father’s most-coveted possession, a black leather recliner, nestled in the corner of the living room. The mantle above the stone fireplace where Christmas stockings once hung. The oil paintings of snow-covered barns in the middle of a forest.

An image of her father wafted through the recesses of her mind. Happy and smiling. The world could be falling apart around him, and he’d still be as jolly as good old St. Nick. Hard to believe he was gone. The urge to cry swelled, but she tamped it down like a good girl and turned away, plastering a smile on her face.

“Where on Earth are you going?”

“Your bedroom?” Her mama tsked. “Good heavens, child, it stopped being your bedroom ages ago when you moved out.”

Laney used a foot to push open the bedroom door and stopped dead. “Good Lord Almighty, Mama, what have you done?”

It was like Santa’s workshop had materialized right in the middle of the room. Her mouth hung open as she gawked at the atrocity. Where once stood a vanity filled with cheap cosmetics only a teenager would buy, now a fake Christmas tree loomed, wilting under the weight of too many ornaments. Garland hung from the high shelf spanning the top of all four walls. A toy train chugged its way around the room. A workbench sat along one wall with a dozen or so holiday crafts waiting to be finished. The walls had been stripped of the soft turquoise blue hue her sixteen-year-old self had painstakingly selected, and replaced with a dreadful shade of gold that mirrored the tree ornaments.

And her daybed? Nowhere to be found. The half dozen or so NSYNC and Jonas Brothers rock band posters were conspicuously missing too. Gone were her hot-pink curtains, fuzzy beanbag, and black shag rug as well as anything remotely resembling her teenage years. All signs of her life there had been erased. 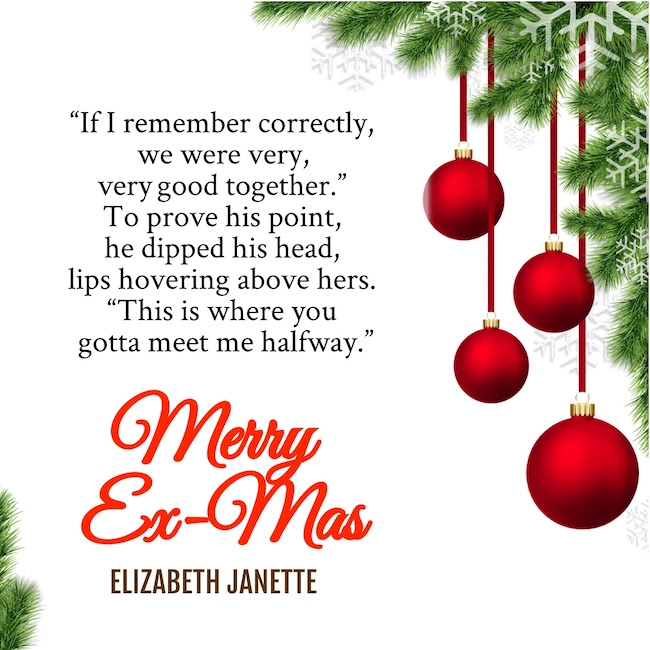 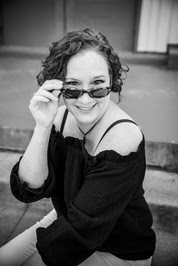 Born to parents who loved to read, it’s no surprise Elizabeth Janette’s lifelong love of literacy led her to become both a teacher and a writer. In fact, writing about getting RIF’d from her teaching job in the 2008 recession is what led her to publish an essay about the experience. From then on, she was hooked. Now days, when she’s not teaching sassy 5th graders, Elizabeth Janette writes romance that both sizzles and thrills. And when she’s not teaching or writing, she works for her local chapter of the National Writing Project teaching teachers how to teach writing. Visit www.elizabethjanette.com to connect and sign up for her newsletter.