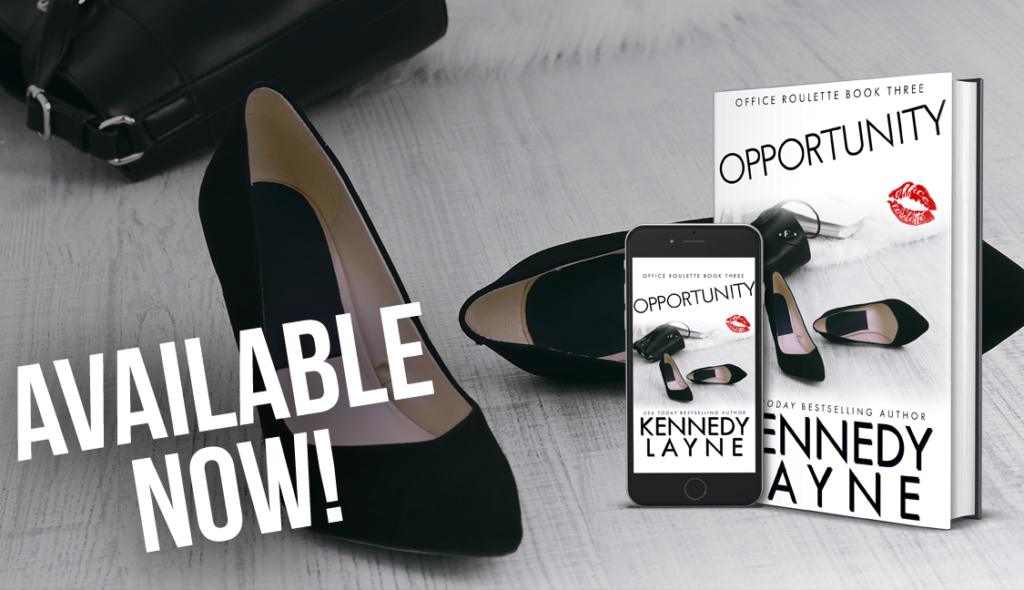 The final book in Kennedy Layne's sexy, suspenseful Office Roulette trilogy, OPPORTUNITY, is available now! Find out more about it below and pick up your copy today! 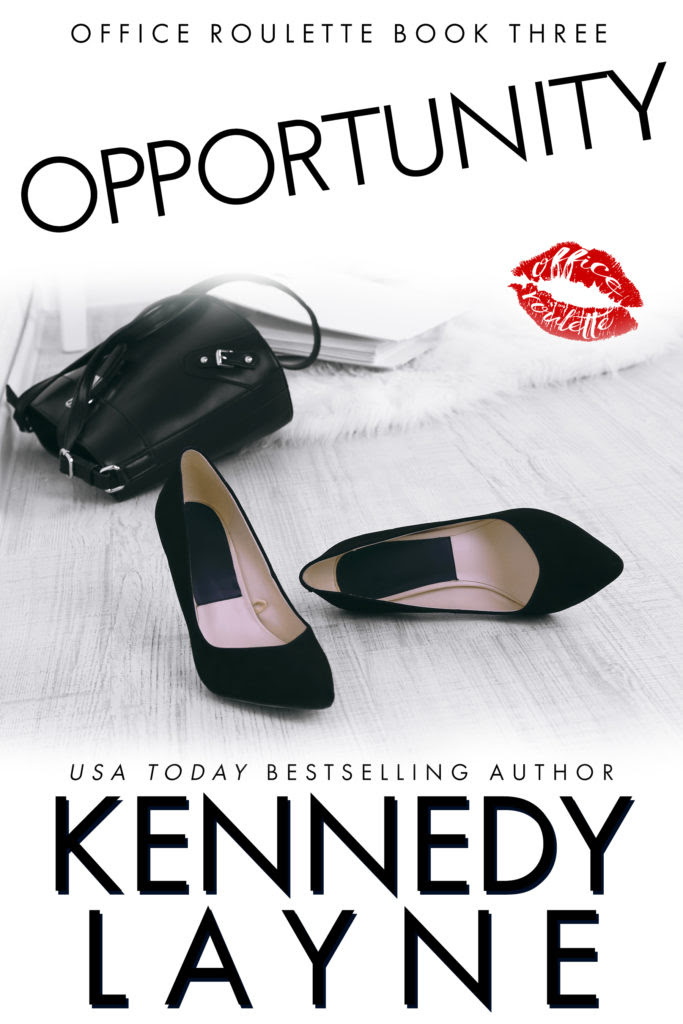 USA Today Bestselling Author Kennedy Layne brings you the thrilling conclusion to the Office Roulette trilogy…
Gareth Nicollet had been born into wealth, but he’d learned at an early age that money wasn’t everything it was cracked up to be. Regrettably, he’d made a meaningful choice early on in his life that now threatened his future with the woman he loved.
Cynthia Ellsworth valued many things, but trust and loyalty were at the top of her list. She’d always known the man who shared her bed had secrets, but she never thought in a million years that he had the ability to destroy her career and her heart with a single blow.
Someone once said that greed was balanced by fear, but that wasn’t entirely true when there was nothing left to lose. Unfortunately, Gareth’s secret is the very reason the roulette wheel is spinning and Cynthia’s life hangs in the balance.
Get your hands on OPPORTUNITY now!
✦Amazon https://amzn.to/2xGMZWp ✦iBooks https://apple.co/2xOhzxo ✦Barnes and Noble http://bit.ly/2xJM5bq ✦Kobo http://bit.ly/2JgBxlw

Get a sneak peek at OPPORTUNITY

It seemed to her that she could sense the moment Gareth was going to speak. She’d never been attuned to a man the way she was with him, and that included many more than Kurt Langston. In hindsight, all Kurt had done was distract her with adventure that she hadn’t seen fit to provide for herself. Cynthia supposed she should be thankful to him for one lesson, because he’d taught her that she hadn’t needed a man to make her happy. She was proud of who she’d become, though she could admit to holding men to higher standards more often than they could meet. It was unfortunate that Gareth had come immediately after her valuable lesson, when the sting was still fresh. She’d always tended to act first and suffer the consequences later. It was in her genetic makeup to be out in front of any issue. She made decisions, in and out of her personal life, and stuck to them. Maybe it was time she give a little bit. “We could always table this discussion until later,” Cynthia managed to draw out around a moan he initiated by working on a knot in her right calf that had been bothering her all day. She lifted the lashes on her right eye to witness his reaction. He hadn’t even flinched at her confession. She could at least give him the benefit of the doubt about why he’d kept the fact that Brad was his brother a secret. She owed him that much, didn’t she? To prove that she wasn’t just delaying the inevitable— which she’d asked for— she raised a knee so that her foot rested against the growing bulge in his pants. “Are you trying to distract me with sex, Cyn?” “Is it working yet?”


Missed the first two books and want to catch up? Get your hands on them now!

From USA Today Bestselling Author Kennedy Layne comes a sexy trilogy that involves greed, power, and the desire to do it all over again…
Smith Gallo has everything a man could ever want at the tip of his fingertips, except of course the woman he loves. To what lengths will he be willing to go to make his ambitions come true?
Laurel Calanthe is one successful stock pick away from making partner when she finds herself in desperate need of an alibi. There’s only one problem. The man who can save her from being arrested is her only competitor and the one who now holds her fate in his hands.
Greed is a powerful motivator in the game of making money, but desire can overcome even the strongest motive.
✦Amazon https://amzn.to/2JjW08T ✦iBooks https://apple.co/2Jj7XMh ✦Barnes and Noble http://bit.ly/2JdvrT2 ✦Kobo http://bit.ly/2xJG4M0 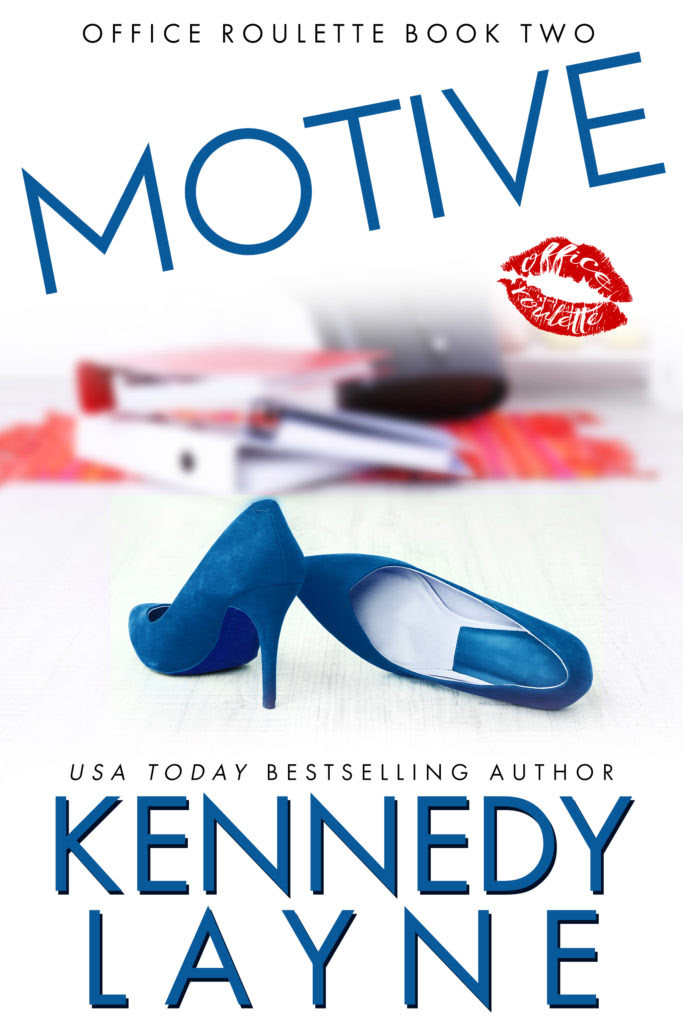 The Office Roulette trilogy continues with an epic battle between blame and forgiveness…
Rye Marshall had it all—wealth, prominence, and the love of his life. But nothing lasts forever, and his perfect world came crashing down around him. When the dust settled, he found himself alone and starting from a clean slate.
Grace Dorrance had made many mistakes in her life, but one stood out above the rest—an epic ending to a complex and passionate relationship. She left her former lover’s life in complete ruins and tried her best never to look back at the wreckage.
Seconds chances are hard to come by, but even more difficult when Grace is arrested for a murder she didn’t commit. This gives Rye the perfect motive to forgive and forget, allowing for new beginnings. Unfortunately, someone’s playing a game of office roulette with everyone’s lives.
✦Amazon https://amzn.to/2xInhR5 ✦iBooks https://apple.co/2xGOSlX ✦Barnes and Noble http://bit.ly/2xGBHkS ✦Kobo http://bit.ly/2xDVAch