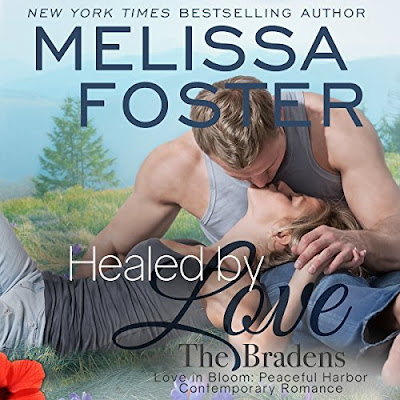 The Bradens are a series of stand-alone romances that may also be enjoyed as part of the larger Love in Bloom series.

Healed by Love is a USA Today best seller

In Healed by Love, Nate Braden has loved his best friend's younger sister Jewel for as long as he can remember, but between their age difference and his respect for Rick, he's always kept his feelings at bay. Now he's back in Peaceful Harbor, and Jewel is no longer 16 years old - but there's an even bigger obstacle standing in his way. Nate and Rick joined the military together eight years earlier. Nate came home a hero, but Rick didn't make it out alive.
All Braden novels may be enjoyed as stand-alone books or enjoyed as part of the series.

Let me start by raving about the narrator. I have listened to Melissa's Love in Bloom series from the beginning and BJ Armstrong is the absolute perfect voice for this series. Once again the tone of his voice and the pace that he reads is wonderful. I find myself sneaking away and finding time to listen just for his voice. Add to his voice the amazing story and you have the perfect listening material. Now onto my thoughts about the actual story...


I love this branch of the Bradens. They are the cousins of Hal’s family and just as scrumptious. Nate is a military man, YUM!, and is dealing with the loss of his best friend, Rick. After two years of being gone he has returned home to the place he has avoided, Peaceful Harbor. I felt for Nate. Nate and Rick went to war together, Nate came home a hero and Rick did not make it home at all. The guilt is overwhelming. Add to that guilt that fact that you are in love with his little sister and it could do a weaker man in. Thank God for his strong family. The Bradens, no matter which branch of the tree they come from, all have that in common. They are strong, loyal, and fierce in protecting each other.

Jewel, Rick’s little sister, has loved Nate forever. Now that he is home she knows that she has to have him. She doesn’t want a one night stand she wants forever, until Nate shares his secret. It could be enough to tear them apart or it could pull them together.

Anyone who has read Melissa Foster’s books before know that they should expect strong characters. Both Jewel and Nate are incredibly strong. They have their beliefs, know what they want, and know where they want to end up. The fun is how they got there.

Book available to buy from ...
Audible
Amazon.com   Amazon.co.uk   Barnes and Noble    KOBO    iTunes
Posted by A Soccer Mom's Book Blog at 3:00 AM