Still Mine by Amy Stuart 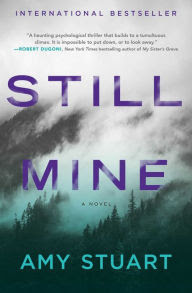 WHAT HAPPENS IF YOU VANISH FROM YOUR LIFE AND LEAVE NO STORY BEHIND?

SOMEONE WILL MAKE ONE UP FOR YOU.

Clare is on the run.

From her past, from her ex, and from her own secrets. When she turns up alone in the remote mining town of Blackmore asking about Shayna Fowles, the local girl who disappeared, everyone wants to know who Clare really is and what she's hiding. As it turns out, she's hiding a lot, including what ties her to Shayna in the first place. But everyone in this place is hiding something from Jared, Shayna's golden-haired ex-husband, to Charlie, the charming small-town drug pusher, to Derek, Shayna's overly involved family doctor, to Louise and Wilfred, her distraught parents.

Did Shayna flee? Was she killed? Is it possible she's still alive?

As Clare uncovers the mysteries around Shayna's disappearance, she must confront her own demons, moving us deeper and deeper into the labyrinth of lies and making us question what it is she's really running from. Twisting and electrifying, this is a get-under-your-skin thriller that will make you question what it means to lose yourself and find yourself in the most unlikely places.

Everyone in this novel was desperate for something.     Clare was desperate to get away from her husband, Malcolm desperate to find Shayna, Charlie desperate to sell his drugs, and so on.   Each character had their own thing going on.     The town of Blackmoor is dying out, there is nothing left living in the town, yet there were friendships, relationships, and mysteries still going strong.       I really enjoyed watching Clare make “friends” in Blackmoor yet I kept my eyes open for the motivation behind these friendships.   With each person she met I made a guess as to who they really were and what their motive for talking to Clare could be.

There were places in this book that I wasn’t sure whose story I was reading.   I plugged through and by the time I got to the end of the chapter I had a better idea of the story I was reading.    Clare and Shayna’s story was almost interchangeable at times and I believe that was where my confusion came from.     Maybe that was some of the pull of the story for some, for me, I like to know who I am reading about.

Still Mine is definitely a psychological thriller.   I was pulled in and didn’t find my way out until the very last page.     If you are looking for a great book that will keep you guessing I definitely recommend picking it up.
Book Links
Amazon   |   Goodreads   |   Barnes and Noble

RT BOOK REVIEWS: “The cliffhanger will have you continuing to bite your nails until there’s a sequel.”

TORONTO STAR: “[The plot] takes hold of you and drags you through the story at breakneck speed. The characters are compelling, the setting chilling and the suspense ever-present. Add to that, Stuart has an ability to tap into the dark psychology behind addiction and abuse, and to bring these complex struggles to life in a way that stays with you for days.”

GLOBE AND MAIL: “An impressive debut, rooted in character rather than trope, in fundamental understanding rather than rote puzzle-solving.”