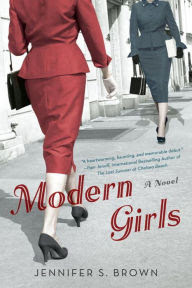 How was it that out of all the girls in the office, I was the one to find myself in this situation? This didn’t happen to nice Jewish girls.

In 1935, Dottie Krasinsky is the epitome of the modern girl. A bookkeeper in Midtown Manhattan, Dottie steals kisses from her steady beau, meets her girlfriends for drinks, and eyes the latest fashions. Yet at heart, she is a dutiful daughter, living with her Yiddish-speaking parents on the Lower East Side. So when, after a single careless night, she finds herself in a family way by a charismatic but unsuitable man, she is desperate: unwed, unsure, and running out of options.

After the birth of five children—and twenty years as a housewife—Dottie’s immigrant mother, Rose, is itching to return to the social activism she embraced as a young woman. With strikes and breadlines at home and National Socialism rising in Europe, there is much more important work to do than cooking and cleaning. So when she realizes that she, too, is pregnant, she struggles to reconcile her longings with her faith.

As mother and daughter wrestle with unthinkable choices, they are forced to confront their beliefs, the changing world, and the fact that their lives will never again be the same….

Modern Girl is an interesting book.  I expected a story of a young girl trying to find her own way and ending up finding herself in the family way.    This is not exactly true.     The story starts with Dottie already in the family way and it then continues on how she saves her virtue from the gossips in the Jewish community in New York.     The choices both Dottie and her mother, Rose, are forced to make are not easy ones.       They push at their values and beliefs changing their lives.

I felt like the story moved at a slow pace to start.   There was history, background, and lessons to be learned before I could get to the rest of the story.    That is not to say that I didn’t enjoy it, I did, I couldn’t put the book down…I was just ready for the rest of the story.    When it came time from Dottie to make decisions the story moved quick.    She is strong, decisive, and true to what she believes is right for her.    I love that she did not fall to what others wanted , she did what was right for her.
The ending??   What??  It isn’t a cliffhanger but there is so much more that could be told.   I love it and hate it.   I love that I can make my own ending, decide what happens to the characters and how their lives continue.  I also hate it in that I want to know exactly what happens.   Is there more coming from Jennifer S. Brown about Dottie and her life?   I certainly would read it.