The View from Prince Street by Mary Ellen Taylor

Thank you Lauren Burnstein at Berkley & NAL, Penguin Random House for my complimentary copy via NetGalley in exchange for an honest review. 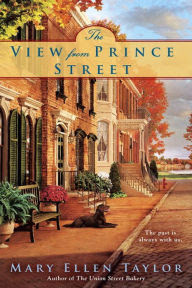 Rae McDonald was fifteen when a car accident took her sister’s life and threw her own into reckless turmoil. When she got pregnant a year later, she found a loving couple to adopt the child. Since then, she’s buried her grief and guilt under a heart of stone.

Lisa Smyth survived the fateful crash, but never told the truth about what happened. And when a family obligation draws her back to Alexandria, the weight of Lisa’s guilt grows heavier by the day.
As both women confront a past refusing to be forgotten, long-buried artifacts are discovered by the Shire Architectural Salvage Company that point to a shared history between families.  Now, Rae and Lisa must finally ask themselves if denying the past is worth sacrificing the future.

The View from Prince Street is a story about living with guilt, moving past that guilt, and mending bridges.     Rae and Lisa have known each other forever.     Lisa was Rae’s sister, Jennifer, best friend.    When Jennifer dies in a car crash and Rae survives it changes their lives forever.     They both dealt with the guilt in their own way and both came out alive but not living life.    Rae was afraid to open her heart.    She did not want to get hurt the way that she had following the accident again.    Lisa kept the truth about the accident buried deep inside her and it was eating her up.

This was not a quick and easy read.   It was good, actually it was really good.   I started and could not put it down.   I devoured each page and knew that I had to read just one more chapter, then one more, and maybe one more before I could put the book down.      The characters became more than just characters in the book; they became friends and people I cared about.   I needed them to find their happiness or at least become settled in the lives they were living.    I was invested in finding their happy ever afters and settling their pasts.

While the story is about Lisa and Rae, it is also about intertwining families and the twisted histories.    I was interested in how Fiona would tie them all together.    Amelia’s story is one that I wanted to know more about.    I love how it was all tied together, the past, the present, and now the future.

The View from Prince Street is a great book.  I recommend checking it out.