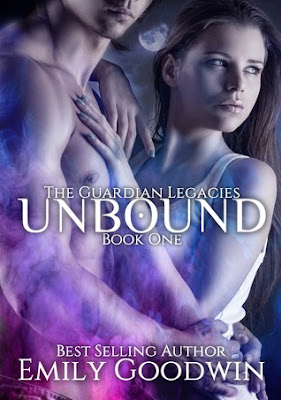 The world of ghosts and spirits is nothing new to Anora Benson; she’s spent her whole life trying to ignore them, trying to be normal. But when the Pricolici, a group of ancient bounty hunters, are sent after her, Anora realizes she is more than just a medium.

As a witch she has power, power she doesn’t know how to use, power that makes her vulnerable to the demons that desire her gifts. Anora is alone and scared, forced to face the darkness on her own.

Then she meets Ethan, a handsome and mysterious stranger who shows up in her life right along with the magic, and he seems to know quite a bit about her and the Coven she hails from. Will she risk everything by trusting him or risk fighting alone?

Paranormal. Sigh.. probably my favorite genre to read, when it is written good.     Unbound is written perfectly.   There is just enough real life in the story to make it realistic, while still having enough paranormal to make it fall into the genre.

I love when a young person comes into them self.    That is what happens to Anora.   She has always known she was different.    She knew she could connect with dead, but she didn’t really know how special she was.     I loved that she accepted what was happening to her.  She took her responsibilities and did what had to be done.   She also did not take what was going on lightly.  She knew that she had to do research and find out what was attacking her and how to stop it.    It was interesting to see all the goodies that her great aunt left her after her death.   These things seemed random at first, especially the items that were mailed to her.   Yet in the long run they all worked to keeping her safe.
I was curious about her parents.  Even without the acceptance spell they seemed to accept a lot.   Whether they were just that busy that they had no clue what was going on with their children, they didn’t care, or they were juts flightly it seemed odd that they could be that blind.    The injuries, the late nights, the overnight sleepovers, the attacks, and everything seemed a little much to be ignored by parents.

This is my first Emily Goodwin book and it will not be my last.    I love this series.  I want more already.